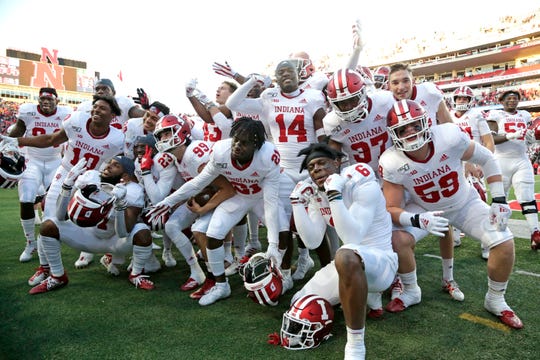 While Nebraska was slightly more efficient on offense, Indiana was able to take advantage of the turnover margin and was able to finish their scoring opportunities slightly better than the Cornhuskers.  Both teams had 8 scoring opportunities.  Both teams turned it over once, but Nebraska missed a field goal and was stopped on 4th down on another drive.  Indiana had one drive derailed by Whop Philyor’s unsportsmanlike conduct penalty.  In the end, it was a game so close that Bill Connelly calculated Indiana’s postgame win expectancy to be 51%, a virtual tossup, based on the statistics.

With the transition to Peyton Ramsey at QB, it would have been fair to assume that Indiana would put up a decent amount of rushing yards.  After all, Nebraska had struggled against the run and Ramsey frequently picks up chuck yards on the ground via his scrambling ability.  However, Nebraska often stuffed the box in this one and dared Indiana to pass.  The Hoosiers ran a pass play 68% of the time with only 3 of those pass plays turning into Ramsey scrambles.  Stevie Scott accounted for 68 of the rushing yards with Peyton Ramsey totaling 50.  Whop Philyor and David Ellis combined for 3.

Nebraska held onto the football like a greased pig.  A greased pigskin, if you will.  I’ll see myself out for that one, but it’s true the Cornhuskers continued to have trouble with ball security.  Of their 11 drives, Nebraska scored on 5 and lost a fumble on 2 others, both occurring in IU territory.  Nebraska also fumbled on another drive.  Although they recovered that fumble, the drive ended in a punt.

Ellis only had 3 returns with the longest of 16.  While Nebraska kicked off 6 times, one was fielded by Bryant Fitzgerald, one went out of bounds, and one was a touchback.  Of the 3 that Ellis returned, he fielded one at the 10 and the other at the 7.  With not as much room as normal to make a move, his returns were stymied.  He did score a 1 yard touchdown run on a nice play call by Kalen DeBoer in the third quarter.

Despite Indiana pass-heavy offense, Peyton Ramsey did a nice job of getting the ball to Indiana’s receivers.  Nebraska had just 2 passes broken up and 1 interception by linebacker Alex Davis on an attempt to Whop Philyor that was batted up in the air.  Lamar Jackson had 1 PBU and linebacker Collin Miller had the other.

Barret Pickering returned for Nebraska and made 1 of 2 field goals and all 4 extra points.  His made field goal was from 30 yards and he missed from 32 yards in the second quarter.

Indiana overcame an early 14-3 deficit to score the first victory as an underdog for Tom Allen.