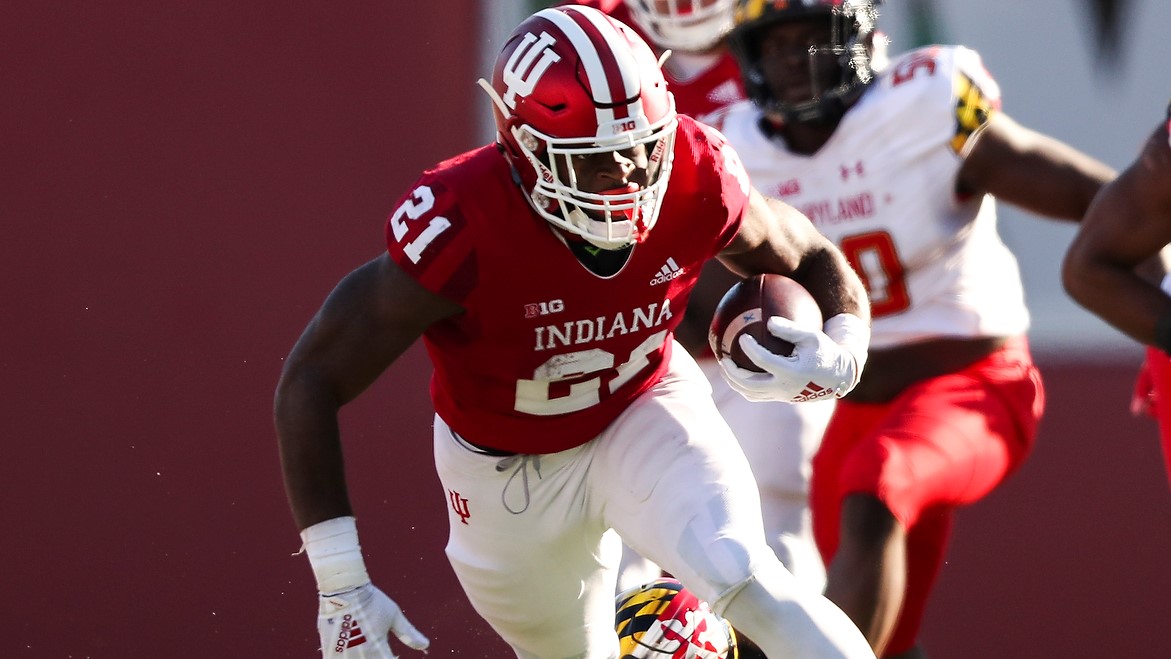 Indiana heads home to face Northwestern under the lights.  The Hoosiers have a chance to win their 7th game on November 2 which would be the earliest since the 1993 Indiana team beat Michigan State on October 30 to move to 7-1.  Additionally, with a win Indiana would have the most wins in a 4 season stretch since the 1991-94 Hoosiers.

The Hoosiers have both started games and come out of halftime very strongly this year.  That’s a testiment to the preparation and adjustments that Kalen DeBoer has made.  Indiana’s non-garbage success rate in the 1st and 3rd quarter is both 53%.  Over the past 6 seasons, the highest 1st quarter success rate was 46% last year1 and the highest 3rd quarter rate was 50% in 2015.  As such, Indiana is 8th nationally in 1st quarter points scored per game at 10.1 and 24th in 3rd quarter scoring at 8.6.

This is the percentage of runs where the runner is tackled at or behind the line of scrimmage.  While Indiana’s pass blocking has been outstanding, their run blocking has just been average.  Indiana’s RBs have averaged a 20% stuff rate in non-garbage time this year which is slightly above the 19% average from 2014-2018.  Stevie Scott is averaging a 19% stuff rate compared to 11% last season.  Having said that, it’ll still be important to feed Scott the ball especially if defenses focus on stopping Indiana’s passing attack.

Even Northwestern is jealous of the Jets’ passing offense.  Let’s run through it.  The Wildcats are completing 48% of their passes and averaging 126 yards per game.  Their passing yards per attempt is 4.1, worst in the nation, and worst of any team in at least 10 years.  In just 1 game, their only win which came against UNLV, have they gone over 4.3 yards per attempt.  Granted, 4 of the 5 defenses they’ve faced in the Big Ten are between good and elite.  Those opponents were Michigan State, Wisconsin, Ohio State and Iowa, all teams ranked in the top 17 nationally in yards allowed per attempt.  Indiana comes in after being shredded by Nebraska’s pass offense.  They completed 20 of 23 pass attempts and averaged 12.8 yards per attempt.  That’s the worst since Tom Allen arrived.  On the season, Indiana is allowing 6.6 yards per attempt.

Indiana has played 31 home games since the start of 2015.  The average attendance in those games is 42,733.  Indiana has not been exempt from the national trend of slowing attendance.  Indiana’s average attendance was over 44k in 2015 but fell to just under 41k last year.  However, as everyone is aware, the opponents on a year’s schedule can make a huge difference.  The historical blue bloods of Ohio State, Michigan and Nebraska led to the highest attended games in the last 5 years.  The Old Oaken Bucket game falls in just behind.  Indiana’s highest attended game in the past 5 seasons outside those 4 opponents was against Wake Forest.  That game came in September 2016, but also occurred with Indiana entering with a 2-0 record off a bowl game the year prior.  With the Hoosiers losing that contest, interest in the program fell.  The very next weekend, Indiana hosted #17 Michigan State at night in front of 1,600 less fans.  Which leads us to this weekend.  Northwestern hasn’t played in Bloomington since 2011, an October 29th matchup in front of 39,239.  The Wildcats probably won’t bring many fans and these non-blue blood games typically haven’t had a huge attendance.  But typically Indiana isn’t rolling into November with a 6-2 record.  Fan interest is high so it will be curious to see if attendance follows suit.