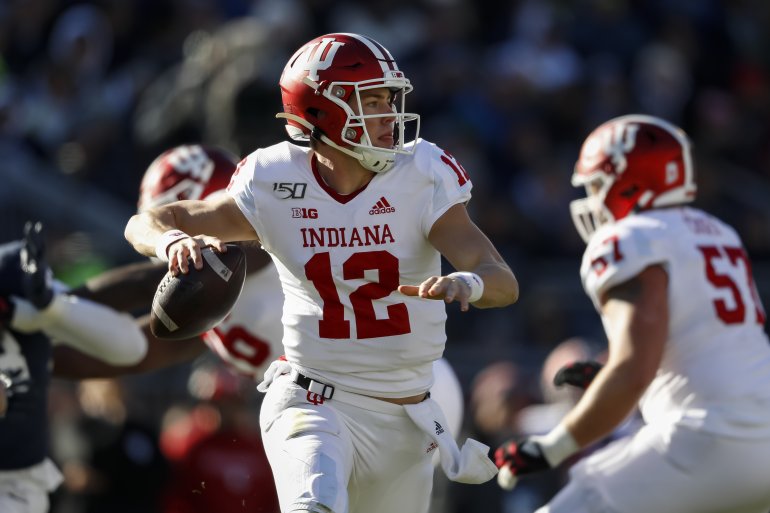 It was another game that Indiana played well enough to beat a Big Ten blue blood, but another game they ultimately fell short.  It’s hard to take solace in that but there’s little time to dwell as Michigan comes to town.  We’ll quickly review the Penn State game before turning our attention later this week to the Fighting Harbaughs.

The Penn State rush defense was as advertised allowing just 3.8 yards per rush after removing sacks and the fake punt.  The longest rush of the day was a 14 yarder by Stevie Scott on his second carry of the day.  While Indiana didn’t have any carries that lost yards, fake punts notwithstanding, they were unable to break many big runs.  Penn State remains first nationally in yards per rush allowed.  Michigan is 8th at 2.78 yards allowed per rush.

The junior QB was fantastic going 31 of 41 for 371 yards passing and adding 31 yards on the ground.  It was both a career high in passing yards and total offense.  He’s playing so well right now that there are very few concerns about the offense against any defense, although having a healthy Whop would certainly help.  Michigan is 5th nationally in yards allowed per game at 262.

Indiana had just 1 pass breakup and no interceptions although Penn State only attempted 23 passes.  Up next they’ll face Shea Patterson who has thrown just 1 interception in his last 5 games.

Penn State had just 3 red zone attempts scoring 2 touchdowns and 1 field goal.  Their other 2 touchdowns came on runs of 38 and 35.

Indiana went into halftime down 6 but scheduled to receive the ball to start the second half.  Unfortunately that drive ended in the fake punt disaster and Penn State promptly scored to go up 13.  That was Penn State’s largest lead of the game.  As discouraging as that fake punt, and ultimately the loss was, credit Indiana for fighting back late in the game.  That sequence would have seemingly deflated previous Indiana teams, but instead Indiana drove right down and kicked a field goal to cut the lead to 10.

Indiana covered and is now 7-3 against the spread this season.