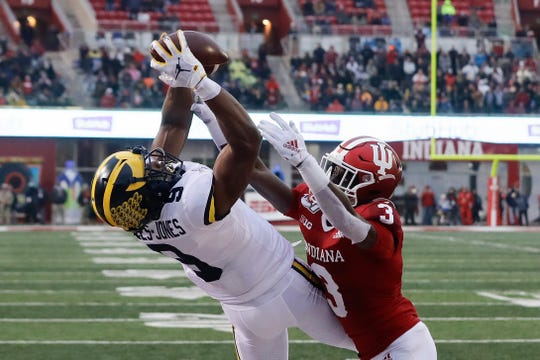 Indiana came out strong averaging 6.4 yards per play on their first 3 drives.  But following that 2nd TD, Indiana would average just 4.1 yards per play the rest of the way.  That was not going to cut it against a Michigan team whose offense was overpowering the IU defense most of the day.

Indiana had 5 passes of 20+ yards in this one, all by Peyton Ramsey.  The Hoosiers had just 1 in the first half, a 23-yard pass to David Ellis in a drive that ended with IU’s final touchdown.  The next 2 came in the third quarter with Indiana down 10.  Following a holding penalty and a sack, IU was backed up with a 3rd and 20 and the game clearly getting out of hand.  A 20-yard pass to Nick Westbrook gave IU new life and 2 plays later a big pass to Peyton Hendershot had Indiana into Michigan territory.  Ultimately the drive ended with a deep shot downfield on 3rd and 1 followed by a holding on 4th down that caused IU to punt.  It was Michigan’s 76-yard touchdown pass two plays later that effectively ended Indiana’s chance to win.  Ramsey did have 2 more deep passes with IU down 25 and both occurred on plays that Michigan was offsides on.  Taking advantage of an offsides is something Ramsey has performed very well at in his career.

Michigan came into the game 8th in sack rate and while they didn’t blow up IU with a huge number of sacks, they did get to Peyton Ramsey frequently while recording 3 sacks and numerous other pressures.  Ramsey took a beating but it was encouraging to hear Tom Allen confirm that he is fine for the Bucket game.  He should have more time against Purdue, a team with just 18 sacks on the year, although Indiana may be without Matt Bedford.

It wasn’t often that Michigan was even in a passing down situation as their leverage rate (the number of standard down plays / total plays) was 79%.  While Michigan’s overall passing down success rate was 38.4%, their non-garbage time was 45.4%.  A couple of successes stand out as really painful for Indiana.  The first was on Michigan’s 1st drive and came after Indiana tackled Donovan Peoples-Jones for a 5-yard loss.  On 2nd and 15, Shea Patterson found Giles Jackson for a 50-yard pass that set up a TD.

The second came on Michigan’s next drive.  The Wolverines faced a 3rd and 9 from the IU 11.  If Indiana could hold them and force a field goal, they’d maintain their lead.  But Donovan Peoples-Jones scored an 11-yard touchdown on an amazing catch that tied the score and Indiana never led again.

Indiana didn’t call any 3rd quarter timeouts but it didn’t really matter in this one as Michigan scored 18 straight in the 3rd quarter to take a 7-point halftime lead to a 25-point victory.

While the first half gave Indiana hope that they could compete, the third quarter erased all of it.  Ultimately Indiana finished the season again without an upset win over a Big Ten East blue blood, but heads to Purdue for a chance at 8 regular season wins.  As disappointing as losing to Penn State and Michigan were, beating Purdue will be huge for the program.