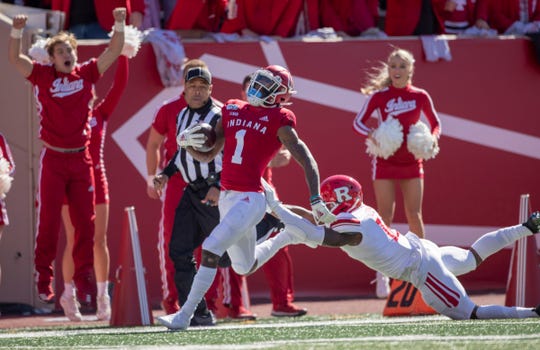 Indiana heads to Purdue for an opportunity to win at least 8 games in a season for just the 8th time in program history and the first since 1993.  While the Old Oaken Bucket itself is a big deal, winning this game is especially important.

I’m taking Tom Allen’s comments to mean Whop is playing in the Bucket game, otherwise everyone is getting a free point.  Philyor was missed against Michigan but has a chance for a big impact against Purdue.  Since Ramsey came in at QB against Maryland to when Philyor left the game against Penn State, Whop has seen a 28% target share from Ramsey.  Indiana may focus more on the passing game this weekend both from a production and injury standpoint.  Purdue is allowing 235 passing yards per game

While Indiana has brought in a lot of talent from out of state,1 there’s something special for Indiana natives playing in a Bucket game.  Indiana natives are averaging 68 all-purpose yards per game this year.  Peyton Hendershot is the clear leader with 502 all-purpose yards with Sampson James adding 153.  If Stevie Scott can’t go, I’d expect James to be Indiana’s primary back with Ronnie Walker staying in his normal role, albeit with a slightly larger workload.  Other (somewhat remote) possibilities include a defender such as possible CB starter Reese Taylor or perhaps Bryant Fitzgerald.

The freshman from Warren Central was Jeff Brohm’s second big WR recruit in as many years.  With Rondale Moore injured the last 7 games, Bell has taking a dominating hold as Purdue’s primary receiving weapon.  He’s averaging 93 receiving yards per game since Moore went down and is 3rd in the conference with 899 yards on the year. He has 5 games eclipsing 100 yards receiving including the last 2 against Northwestern and Wisconsin.  Last season Moore torched the Hoosiers for 141 yards through the air.

Havoc Rate is a team’s total tackles for loss, passes defensed, and forced fumbles divided by total plays.  When we did this heading into the Purdue game last year I wrote: “This year’s senior class has actually generated the fewest havoc plays of any of the classes with just 22.5, roughly 2.9% of all plays and just under 20% of all IU havoc plays.  Actually, the freshman class leads the team with 34 which bodes well for the future.”

While that senior class graduated, this year’s senior class takes the prize for fewest havoc plays by a class with just 11.5, or just 1.6% of all plays.  Allen Stallings leads the seniors with 5.  Andre Brown has 3, Reakwon Jones has 2.5 and Khalil Bryant has 1.

On a positive, last year’s freshman class has grown into sophomores who again lead the team in havoc plays with 57.5.  Micah McFadden leads that class, and the team, with 10.5.  It’s a talented class of defenders including Cam Jones and James Head, 2nd and 3rd in the class respectively, that could soon lead to a defense as talented as the 2016 and 2017 teams.

If the senior misses, I suppose you can blame all the people who go Over here.  Justus is 14 for 14 on field goals this season, one of 3 kickers with a perfect mark (meeting certain playing time criteria).  He’s normally automatic but in addition to facing the Boilermakers, he may also be batting Mother Nature.  Saturday’s forecast looks…less than ideal.