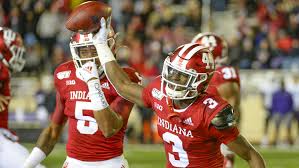 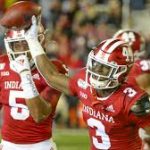 Next up in our Position Group Progress Report series, IU’s much-improved cornerback group.

Throughout its recent (and maybe not so recent) history, IU has struggled to find reliable corners. Here is a complete list of IU’s corners in which I consistently had confidence in the 15 seasons leading up to 2019: (1) Tracy Porter. (2) Rashard Fant. So yes, this was a position in need of a talent upgrade.

Heading into 2019, IU had four players returning with starting experience, yet the position still seemed far from settled. Those four, Andre Brown, Raheem Layne, A’Shon Riggins, and Jaylin Williams, all figured to factor into the equation in 2019. Williams in particular had come on strong towards the end of 2018 and seemed likely to start. In addition, former Ben Davis standout QB Reese Taylor had completed the switch to corner, but whether he would be ready to contribute in 2019 was an open question. Finally, highly rated recruit Tiawan Mullen appeared to be a real threat to steal a starting spot at some point in the season.

When the defense took the field against Ball State in Week 1, Brown and Layne were the starters, somewhat surprisingly. Riggins and Williams rotated in, while Mullen only got in for a handful of plays late in the game. It didn’t take long for the defensive staff to shake things up. By the end of September, Riggins’ career was over due to injury1, and Williams and Mullen had supplanted Brown and Layne as starters.

But that wasn’t the end of Brown and Layne as contributors, however. Both still rotated in at CB, as did Reese Taylor. Additionally, Brown and Layne saw regular action on passing downs. Brown lined up at field 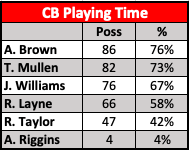 safety, and Layne often came in as a third CB, lined up on an outside CB, while Mullen bumped inside to nickel (in place of the Husky). The possession chart to the right includes these passing down appearances, so Brown leads the way, even though at least 25% of those appearances were not technically at CB.2

When you dig into the performance of this group, it’s actually pretty good. For comparison, I’ve included the coverage stats from 2016, 2017 and 2018 as well.

Taken as a group, the 2019 CBs are better than the 2017 and 2018 groups in nearly every statistical category, while falling just a little short of 2016’s crew (primarily the duo of Fant and Riggins). The only really glaring issue is that the 2019 TD% allowed of 8% was the highest of the four seasons. And it doesn’t take a stat-head to look at this chart and determine where the improvement came from. Tiawan Mullen was very, very good. Take the Michigan State game, for example, which was really Mullen’s first full game as a starter. He was targeted 7 times, allowed 0 catches, and broke up 4 passes. In fact, when you compare Mullen’s true freshman season to Rashard Fant’s best year, his redshirt junior season in 2016, it’s quite close:

In the end, I’d give Fant the slight edge due to a lower Rec%, TD% and penalty %, but the fact that it’s even close means Mullen had one of, if not the best, true freshman season ever by an IU corner. And once you factor in run support, where Mullen is head and shoulders better than Fant, Mullen may already be better than Fant was at his best.

I could write about Mullen all day3, but as for the rest of the group, Jaylin Williams showed some improvement, but didn’t really take the step forward that many (including me) expected him to make. With two seasons left, he still has plenty of time to lock down the starting spot opposite Mullen…but Reese Taylor will have something to say about that. Taylor took Williams’ starting spot against Purdue and played a whale of a game. He is better than Williams against the run, and he appears to be at least Williams equal in coverage. His coverage numbers are more than a little skewed by one big TD he allowed to Chris Olave of Ohio State (and he was far from the only corner to get torched by Justin Fields and Olave). Brown and Layne were pretty much what we thought they were – less than total liabilities but not B1G-caliber starting corners.

Finally, I should mention that while the defense was much maligned for its tackling, it generally wasn’t the fault of the CBs: 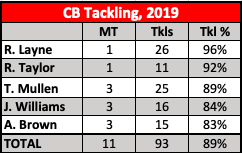 Moving forward, I feel comfortable penciling in Mullen and Taylor as your 2020 starting CBs. Might as well put Mullen’s name in ink. Jaylin Williams should see plenty of playing time too, as this defensive staff rotates regularly and now uses additional corners in passing situations. On that point, I would not be surprised to see Raheem Layne take over Andre Brown’s passing down field safety duties. While Layne may not possess the coverage skills of Mullen, Taylor, or Williams, he’s almost certainly better than IU’s safeties against the pass. With respect to new blood, redshirt freshmen Larry Tracy could push for time, but I suspect it will take an injury for him, or one of the incoming freshman, Christopher Keys and Lem Watley-Neely, to see significant action.