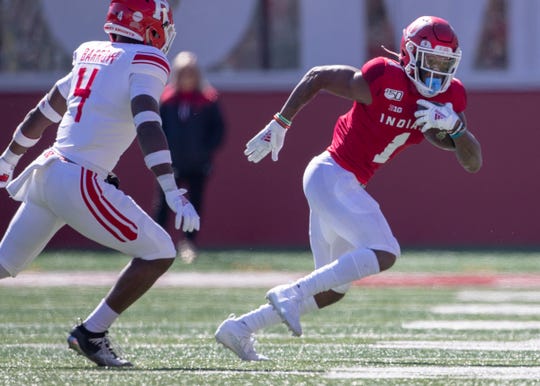 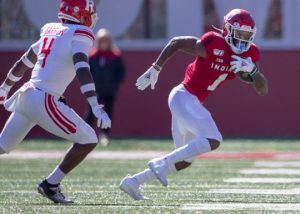 Next up in our Position Group Progress Report series, we flip back to the offense to cover Indiana’s wide receivers and tight ends.

If running back wasn’t the position you were most confident in prior to season then it was probably wide receiver.  Seniors Nick Westbrook and Donovan Hale returned at the outside position.  They were backed up by a junior in Ty Fryfogle who played a decent amount as a sophomore, mostly at outside receiver but also some from the slot.

At that inside position, Whop Philyor had flashed his potential in limited time as a freshman and in a more prominent role as a sophomore before injuries derailed his second season. Big things were expected from Whop, but if there was any concern here it was depth-related.  In 2018, Indiana was able to use Luke Timian, Philyor, and J-Shun Harris at slot.  With Timian and Harris both gone there was little experience behind Whop.

At tight end, we expected big things given the history of OC Kalen DeBoer.  Peyton Hendershot had proven very reliable as a freshman and seemed like a natural fit for what DeBoer was trying to do.

In examining a player’s catch rate there are lots of different factors to consider.  Quarterback play is certainly one.  Another is depth of target.  Deep passes have a lower expected catch rate than short, dump-off passes.  Fortunately we have tracked depth of target, the distance from the line of scrimmage to where the receiver attempts to catch the ball, in non-garbage time for the last 3 seasons.1 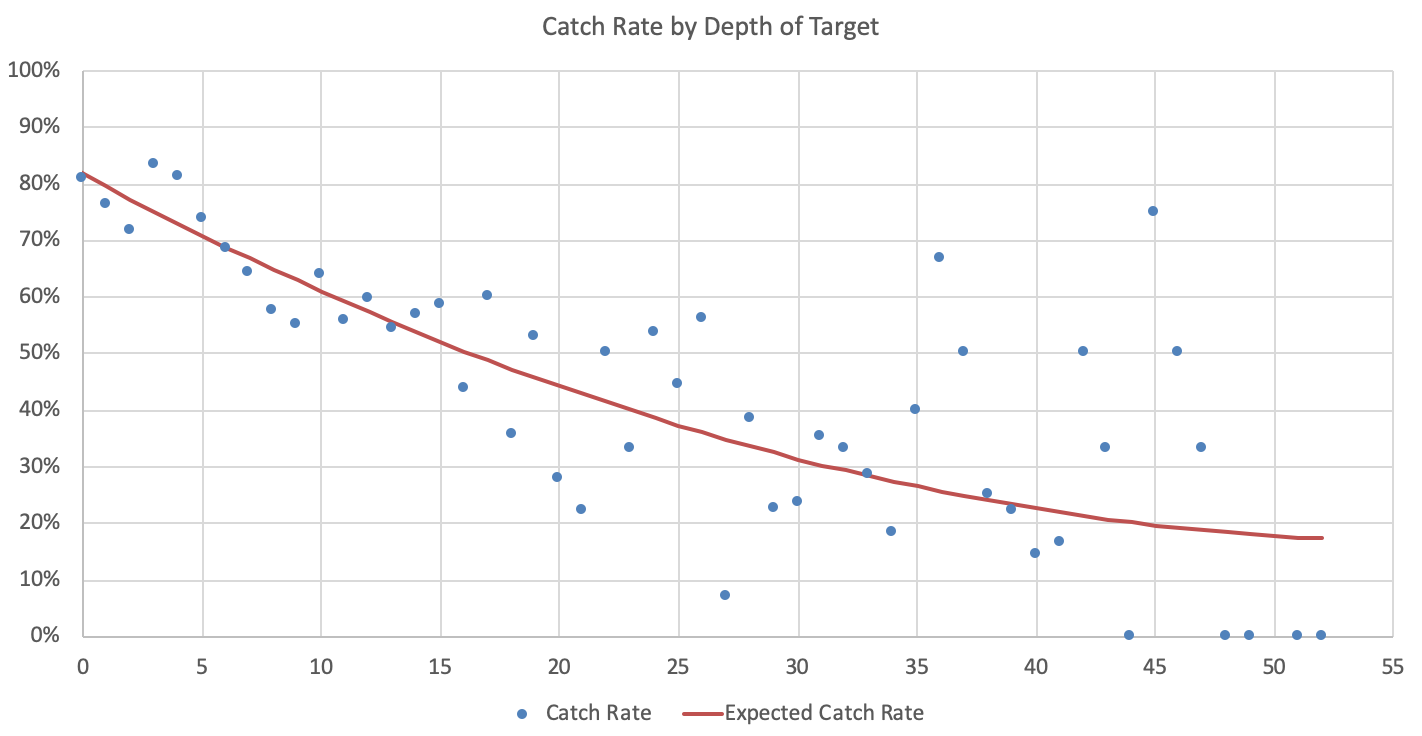 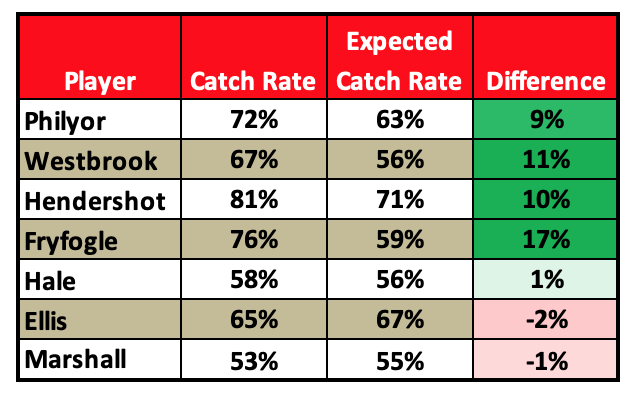 Then we can also determine a receiver’s expected catch rate given the depth on each of their targets.

I think the results pass the sniff test.  Indiana’s top 4 pass catchers by both target share and receiving yards all exceeded their expected catch rate.

I also wanted to see if this was a product of the 2019 offense or if we could make any conclusions on receiver performance.

First, in looking at Whop Philyor, Indiana’s top receiver in 2019, it’s clear he has exceeded his expected catch rate in each of his 3 seasons.  In his first 2 seasons, his average depth of target was just 5 which resulted in a high expected catch rate between 70-73%.  Still, he exceeded that.  This year in addition to these short catch-and-run passes, he became more of a target downfield.  His average depth of target more than doubled to 11.  While his overall catch rate dropped, it was expected due to seeing more attempts downfield, but he still managed to exceed expectations.

The other receiver with a target share above 3% in each of the last 3 seasons is Donovan Hale.  He was primarily a deep threat during his career which is why his expected catch rate is so much less than Philyor’s.  He struggled as a sophomore but rebounded in his final 2 seasons.  Yet, he clearly wasn’t exceeding expectations as much as Whop.  That seems to align with what we saw on the field.

Looking strictly at 2019, the health of Indiana’s receivers led to a really consistent depth chart.  Donovan Hale was injured late in the year although by that point Ty Fryfogle was seeing more playing time anyway.  Whop Philyor missed a game and a half and David Ellis stepped in.  But as a whole, this group stayed healthy and was extremely productive.  The top 4 pass catchers in terms of target share all had catch rates much higher than expected.  The two players with a negative catch rate differential were both freshman.  I’m sure there are areas of their game such as route running that they can improve on which will help provide a little bit more separation from a defender, thus providing a better chance at making the catch.

Indiana loses Nick Westbrook and Donovan Hale.  It is also possible they could lose Whop Philyor to the NFL draft.  Certainly less qualified players have declared for the draft and you can’t fault a guy for wanting to get paid.

However, assuming he does return, this will again be a strong group.  As a whole, it will have less experience, but the young players have a lot of potential.

Inside you’ll see Philyor and David Ellis.  Philyor is Indiana’s best skill position player and a player opposing defenses must account for.

Outside, Ty Fryfogle returns for his senior year.  He had a great 76% catch rate despite an average depth of target of 12.8 yards.  His catch rate on passes 20+ yards was 50% which is fantastic.  I’m expecting big things from the senior from Mississippi.  Miles Marshall, Jordan Jakes, and Jacolby Hewitt are strong possibilities to rotate opposite him as well as back him up.  Rashawn Williams, Indiana’s top 2020 recruit, could also be in the mix for playing time.

At tight end, Peyton Hendershot is extremely reliable.  The only questions at tight end are (1) whether the new offensive coordinator will emphasize the position as much as Kalen DeBoer and (2) if Matt Bjorson, T.J. Ivy, or Gary Cooper can handle the position if Hendershot were to suffer an injury. Assuming an offense similar to DeBoer’s, I suspect that if Hendershot missed any significant time, Cooper would be the primary pass-catching replacement.

Outside of Philyor, Fryfogle, and Hendershot there are a lot of unknowns.  But in a good way, Indiana’s recruiting has improved to the point that these young, unproven players have more potential than their predecessors.  Whether they can reach it, especially in 2020 without DeBoer, remains to be seen.