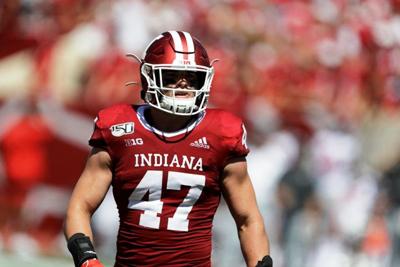 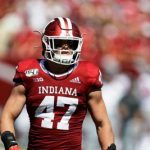 As we all gear up for the Gator Bowl, take a look at how IU’s linebackers and huskies performed in the regular season.

Other than 2018 starting MLB Dameon Willis and oft-injured WLB backup T.D. Roof, everyone who saw action in 2018 at MLB, WLB or Husky returned. Starting WLB Raekwon Jones, a 5th year senior, was back, and sophomore Cam Jones, after a position change from Husky, was expected to push him for time there. At Husky, mainstay Marcelino Ball was expected to start and be one of the defense’s primary playmakers in his redshirt junior season, with sophomore Jamar Johnson providing depth. Sophomores Micah McFadden and Thomas Allen, as well as redshirt freshman James Miller, would vie for playing time at MLB. In sum, this group was a mix of experience and potential. For the defense to excel, however, a playmaker or two needed to emerge at MLB and WLB.

McFadden was the clear starter at MLB from IU’s first game. He was also the only MLB to play in passing situations. This led to him appearing in nearly 90% of IU’s defensive series. For a first-year starter, that’s a heavy dose of playing time. Thomas Allen was the first player off the bench at MLB until he suffered a season-ending shoulder injury against Nebraska in late October. James Miller had been seeing a handful of plays a game at MLB even before Allen went down — especially in short yardage scenarios — but his playing time ticked up at that point.

At WLB, Raekwon Jones was the 1st teamer on standard (non-passing) downs throughout the season. Cam Jones spelled Raekwon on standard downs at around a 70-30 split, and Cam Jones also handled all passing downs. As a result, both Joneses played quite a bit at 82% for Raekwon and 75% for Cam.

For the fourth straight year, Marcelino Ball was the clear starter at Husky to start the season.1 Jamar Johnson spelled Ball, and over the course of the season, his playing time increased from just a few plays a game to close to an even split with Ball in the Purdue game. It should also be noted that for many passing downs this season, the Husky position was replaced by a third, or nickel, corner.2

In the Allen/Wommack scheme, linebackers and Huskies are havoc positions. They are asked to blitz regularly, and are expected to make plays in the backfield, while also handling pass coverage responsibilities. So, much like we did with safeties a few weeks back, let’s see how the 2019 group stacks up to its predecessors in creating havoc:3 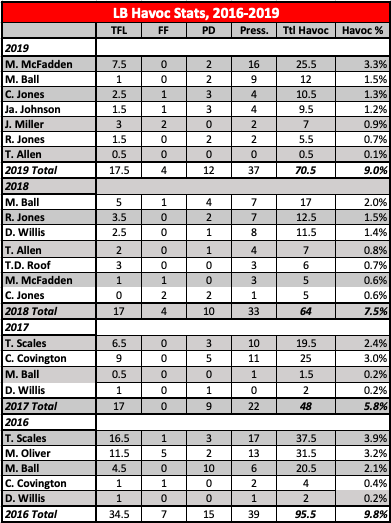 As the chart shows, 2019’s LBs/Huskies created the 2nd-most havoc in the Allen Era both in raw numbers and in rate. On a player level, McFadden put up the highest havoc rate since Tegray Scales in 2016 and recorded the most pressures and TFL since ’16. Simply put, McFadden was everywhere and may have been the most important player on IU’s defense. Elsewhere, Ball recorded the lowest havoc rate of his career (excluding his injury-shortened 2017 season). Part of that can be attributed to him coming off the field in passing situations, which led to a dip in passes defensed, but he also only recorded one TFL after tallying 4.5 in 2016 and 5 in 2018. Jamar Johnson’s 9.5 havoc plays in limited duty is impressive and hopefully a sign of things to come. A total of 15.5 havoc plays from the WLB position (both Joneses) is the lowest output from that position in the Allen Era. 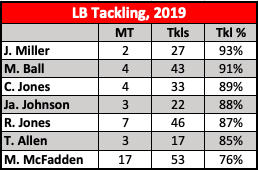 While McFadden may have been IU’s most important defensive player, he had one glaring weakness: tackling. 17 missed tackles and a 76% tackle rate (non-garbage time) are not what you’re looking for from your MLB. That said, at least some of those missed tackles were the result of McFadden using his speed and athleticism to get close enough to a ballcarrier to make a tackle attempt, but not close enough to complete the play. Contrast this with James Miller, who only missed two tackles all year, but who, at least to this point in his IU career, has not demonstrated the ability to play sideline-to-sideline like McFadden.

One other tackling note: Marcelino Ball missed two tackles against Ball State and then proceeded to miss only two more tackles for the rest of the season. His tackle rate of 91% was the best of his career.4

Finally, there isn’t too much to say about this group in coverage because the WLB and MLB are more often than not playing zone if they drop into coverage at all. However, Jamar Johnson’s coverage numbers are once again promising, although the sample size is admittedly small. Cam Jones’ numbers took a major hit when Brycen Hopkins, Purdue’s stud tight end, torched him for a 75-yd TD. I think it’s reasonable to expect his numbers to look better in 2020. Ball’s three penalties in limited coverage opportunities is less than ideal and is part of a bigger penalty problem for him. This chart doesn’t capture personal foul penalties, of which Ball had a few, all of which seemed to come in inopportune game situations.

Even with his flaws, McFadden should be at the center of the 2020 defense, literally and figuratively. He has to clean up his tackling, and there’s some work to be done on diagnosing and defending runs between the tackles, but he has the potential to be an All-B1G linebacker. Cam Jones will likely slide into the starting role at WLB, bringing athleticism and playmaking to the position, but needing more seasoning on run fits. Coach Allen’s defense seems to be at its best when it has a playmaking WLB in the Scales mold, and I wouldn’t be surprised if Cam makes significant progress in that direction in 2020. James Miller and Thomas Allen (assuming the latter is healthy) should provide valuable depth at MLB. Miller is already IU’s best between-the-tackles run-stuffing linebacker. He’ll have an important role in the season-opener against Wisconsin. In terms of depth at WLB, Aaron Casey and D.K. Bonhomme, both of whom were regular special teams contributors in 2019, are likely candidates.

At Husky, assuming Marcelino Ball returns for his senior season (and we have no indication that he won’t), he will start again. As I noted in the safety preview, I wouldn’t mind seeing Jamar Johnson move to one of the safety spots to get him on the field more, but if that doesn’t happen, he will continue to push for time behind Ball. If Ball plays like he did in 2019, with limited playmaking and not-so-limited penalties, it’s not out of the question that Johnson could supplant him as the starter. Cam Williams, a four-star recruit who redshirted in 2019, would be the likely 2nd teamer if Johnson changes positions.