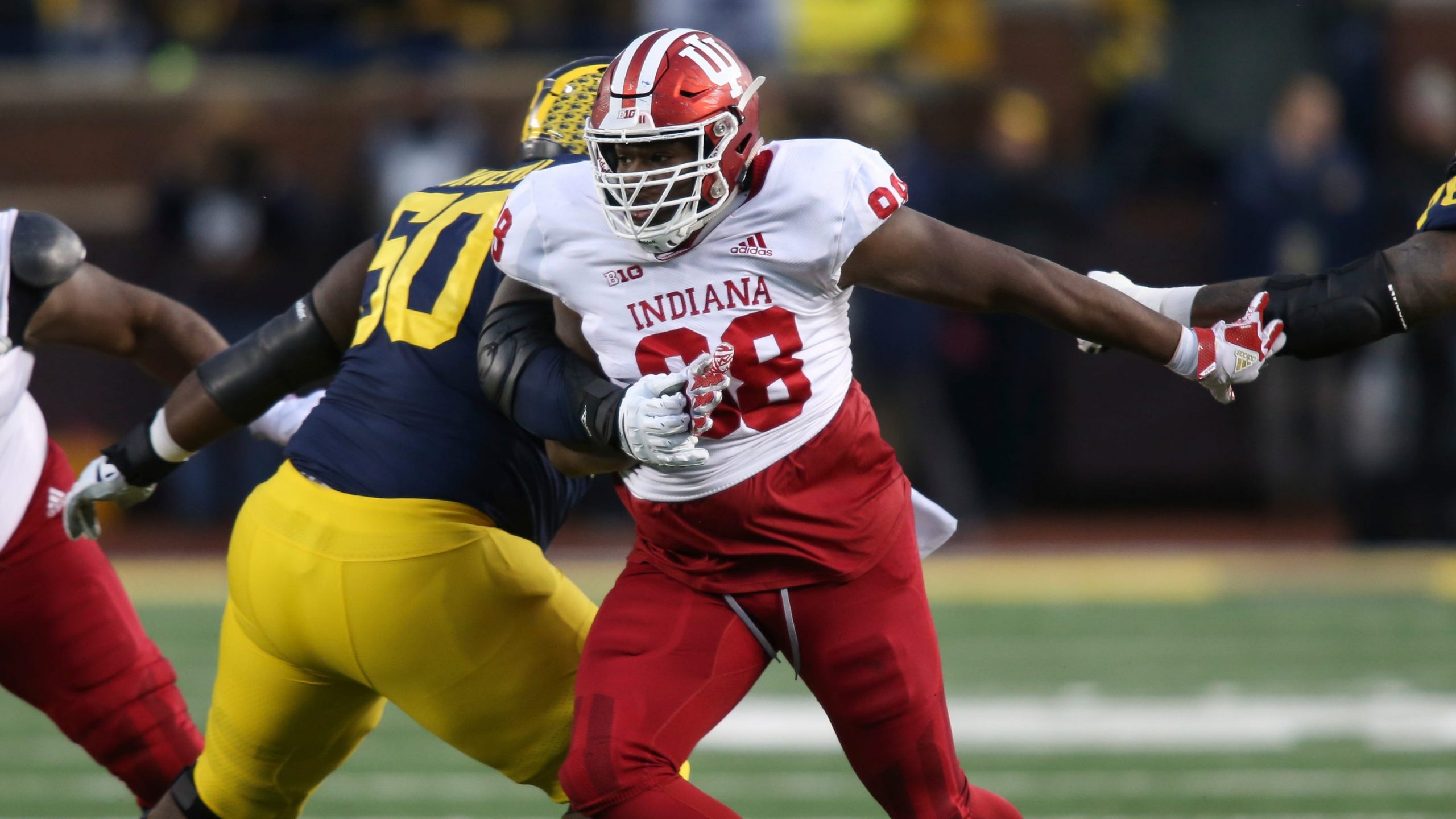 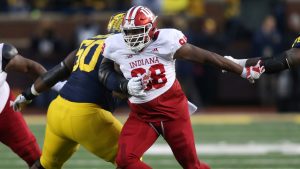 After a little post-season break, today we return to Position Group Progress Reports with a look at the defensive line.

We expected Jerome Johnson to man the 3-tech DT and would probably be IU’s best D-lineman. James Head would likely take over the starting spot at SDE and hopefully emerge into a real pass rush threat in his sophomore season. Senior Allen Stallings appeared to be the likely starter at WDE. At NT, there wasn’t a clear starter, but the most likely option was Juan Harris, who had returned to IU from a year at juco. In 2017, Harris contributed at NT as a true freshman. After those four, the rest of the options were young and inexperienced. It would be up to Mark Hagen to cobble together a second group (at least) from that group.

It took a few games, but IU eventually settled into a relatively predictable pattern of using 8 linemen per game. The main surprise was at WDE, where Michael Ziemba was the usual starter over Stallings. That said, Stallings appeared in roughly the same amount of possessions as Ziemba, and there were games where Stallings actually 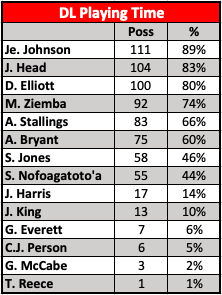 played more. At DT, as expected, Jerome Johnson started and played the highest percentage of IU’s defensive possessions among D-linemen. For most of the season, Shamar Jones spelled him, but Jonathan King and Gavin McCabe also saw limited duty there. Although redshirt sophomore Alfred Bryant surprisingly started the season as the #1 SDE, it didn’t take long for James Head to take that spot. Bryant still played quite a bit, however. At NT, juco transfer DeMarcus Elliott and Juan Harris split time early on, but by the end of September, Harris had opted to retire from football. At that point, Elliott’s playing time ticked up, and true freshman Sio Nofoagatoto’a emerged as the new No. 2. Fellow true freshman C.J. Person also saw limited action at NT late in the season.
On passing downs, IU generally switched to a 3-down alignment. Johnson and Head usually stayed on the field (or returned to it). Early in the season, Marcelino Ball lined up as a rush end with a hand on the ground, while the WDE, either Ziemba or Stallings, stood up and generally roamed around the line of scrimmage. After that experiment didn’t really pay off for the first few games, the coaches went back to a more traditional personnel group, but stayed with 3-down in passing situations. Johnson and Head would line up outside, while one of the NTs, usually Elliott or Sio, would line up at nose.

Borrowing IUFB’s “Word for the Year” and using it retroactively, the word for the 2019 D-line was “improving.” They weren’t a finished product and the performance wasn’t always pretty, but in nearly every respect, they were better than the 2018 D-line. Starting with Havoc Rate1, the chart below shows how the IU defensive line has fared from 2016 to the present. As a unit, the 2019 line had its best havoc output since 2016 at 10.4%, a nice jump from 9.4% in 2018. Individually, all the returning players (Johnson, Head, Ziemba, Stallings and Bryant) improved on their 2018 havoc rate in 2019 – Ziemba in particular jumped from .1% to 1.8%, which tied for the team lead. 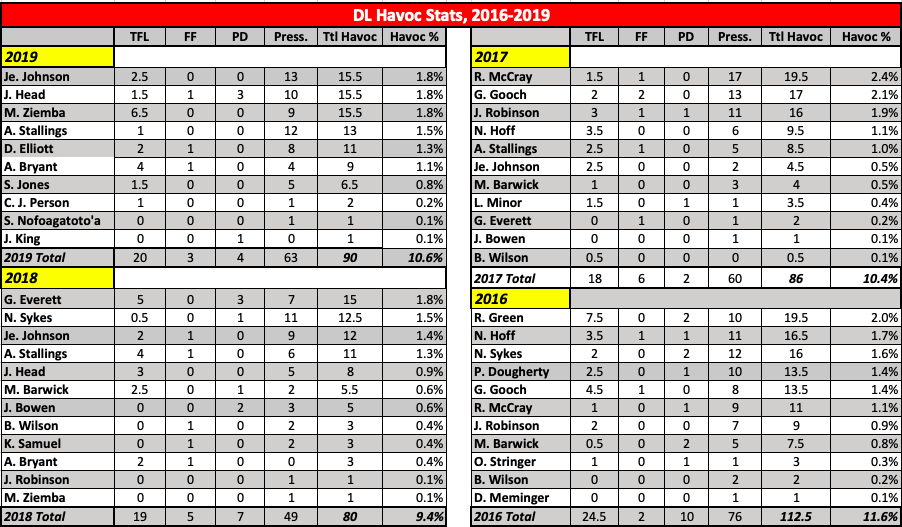 Next, the charts below show a series of advanced stats intended to show a defensive line’s value. For reference,

If you don’t know what any of those terms mean, you can find a definition here. The “Rk” numbers reflect IU’s overall rank among FBS schools. I believe these stats are all non-garbage time.

While IU’s 2019 rankings won’t blow you away, every one represents an improvement on 2018, with passing down line yards as the sole exception. In fact, the 2019 numbers were similar to 2017’s in most respects, although the 2017 defense generated a silly amount of pressure on passing downs. Based strictly on my pressure tracking, the IU defense generated the most pressure of any of Tom Allen’s defenses at 31%. In general, 2018 wasn’t a high bar from a defensive line performance standpoint, but it’s clear that this group is trending in the right direction.

Finally, the tackling numbers for the D-line were mostly good, with the exception of the two WDEs, Stallings and 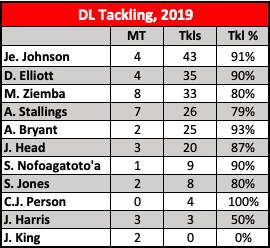 Ziemba. It should be noted that in Allen/Wommack’s scheme, WDEs are asked to drop into coverage and play in space a bit, so it’s not a surprise that they would miss a few more tackles than others on the line.

Of the 14 names that appear on the Participation Chart above, 11 are returning. Of the 3 that won’t be back, only Allen Stallings saw regular playing time throughout the season. Juan Harris likely would have as well had he not retired.2 The question is, who will coach them? It won’t be Mark Hagen, who recently accepted a job at Texas. It also won’t be Ron Burton, who seemed like a great hire to replace Hagen, but Burton opted to return to Michigan State instead. Whoever gets the job is clearly stepping into an enviable spot from a returning production standpoint. Other than identifying a second WDE, his rotation is more or less set. The bigger issue: can the replacement continue the trend of improvement that Hagen created in 2019? Is there more upside left to capture for Johnson, Head, Elliott, Ziemba, etc.? It certainly seems like there should be, but realizing that upside is never a guarantee. If just a few of the returners continue to improve and the rest hold steady, the 2020 D-line should be the best of the Allen Era, especially if James Head takes another step forward and becomes a true edge-rushing force.

In addition to the large returning core, young players should also push for time, particularly Beau Robbins and Jeramy Passmore at SDE and Damarjhe Lewis at either interior spot. It will be a major development if Madison Norris can carve out a pass rushing niche at WDE, although at this point, I’ll believe he can put on sufficient weight to have an impact when it actually happens. IU is also still in the market for at least one grad transfer at DL, Jovan Swann, who I believe is expected to slot in at DT. If IU is able to add Swann, my guess is that Jerome Johnson would slide to NT.

In sum, the future looks bright along the defensive line. Now Coach Allen just needs to find someone to coach them.