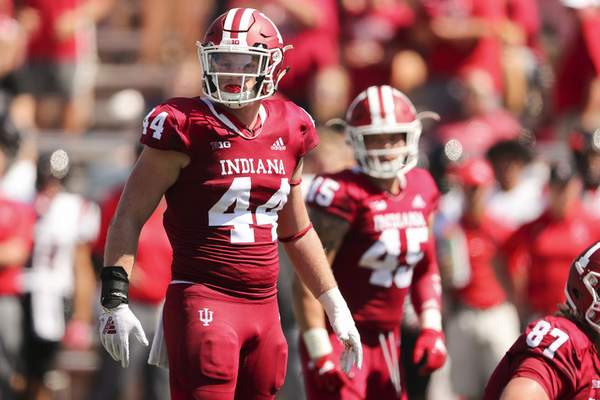 Now that it seems like we might actually have a season (knocking on all the wood), we ranked the 50 (or so) most important players on the 2020 Indiana Hoosiers. Not “best” necessarily, or best pro prospect — although there’s plenty of correlation between those and our list — but most important, meaning the 50 players whom IU can least afford to lose. Today we start with the players ranked 50-41, a group that includes several highly-touted young players, along with some under-the-radar upperclassmen who have waited in the wings for a few years and should challenge for more playing time in 2020.

For the experienced players on this list, each will be evaluated in three categories: “Has,” “Shows,” and “Needs.” “Has” refers to a skillset that the player consistently demonstrates. “Shows” refers to a skillset that the player flashes from time to time, but has not firmly established. “Needs” is a skill or trait that the player still needs to develop to meet his potential.  For the few players that appear on this list who’ve seen little or no playing time to date, we’ll instead describe where that player may fit in Coach Allen’s plans for 2020.

Without further ado, the rankings:

Normally, each player will be broken down individually, but for some of these young players at the beginning of the list, combining them makes more sense. That’s definitely the case here.

Where They May Fit: These three young wide receivers won’t be starters in 2020, but all have starter-level potential (at least).1 In 2019, six receivers saw meaningful playing time, two of which (Nick Westbrook and Donovan Hale) graduated. One of the six, David Ellis, is now listed as a running back, although I suspect he’ll see plenty of action in the slot as well. Ty Fryfogle and Miles Marshall are your presumptive starters on the outside, with Whop Philyor in the slot. The second-team spots for both outside receiving positions seem wide open at this point, as is the second-team slot position if Ellis is truly more of a running back. The only obvious upperclassmen competition for those spots is Jacolby Hewitt. It also wouldn’t surprise me at all if a larger group of receivers rotate in this season, as new OC Nick Sheridan and WR Coach Grant Heard try to figure out what they have among these younger guys.

As to each player specifically, Jordan Jakes has size that no one else in IU’s receiving corps can match, at 6’5. Javon Swinton has been the talk of Fall Camp, particularly after his ridiculous one-handed catch in last Saturday’s scrimmage. He could be someone who bounces back and forth between the slot and outside. Finally, Rashawn Williams was a 4-star recruit from a talent-rich high school program in Detroit. We haven’t heard much about him this fall, but based on pedigree alone, I would expect him to be in the mix.

Where They May Fit: We saw a bit of Gary Cooper last season, and we might be able to come up with Has/Shows/Needs, but that would inevitably lead to “Needs To Recover An Onside Kick,” and that just hurts. So instead, let’s talk about where Cooper and grad transfer and fellow tight end Khameron Taylor may fit. Aside from Peyton Hendershot, Cooper is the best receiving tight end on IU’s roster. Taylor, on the other hand, is primarily a blocking tight end. Absent an injury, it’s unlikely either unseats Peyton Hendershot or Matt Bjorson as the No.1 or No. 2 tight end, respectively. In that scenario, Taylor will compete with Turon Ivy for 3rd TE duties in short-yardage situations, and Gary Cooper could find himself spelling Hendershot in passing situations. However the playing time shakes out, with Hendershot, Bjorson, Cooper, Taylor, and Ivy, IU has five experienced and dependable tight ends – when is the last time that could be said??

Has: A taste of game experience.2 In his redshirt freshman season, King appeared in 13 non-garbage time possessions in 2019, primarily spread across the Nebraska, Northwestern, and Penn State games.

Shows: Some playmaking ability. King burst into the backfield against Northwestern (even though he missed the tackle) and later knocked down a pass.

Needs: With the help of the coaching staff, King sort of needs to pick a lane. Should he bulk up a bit and become a full-fledged 3-technique defensive tackle? Should he slim down and compete for time as a strong side defensive end? As it is, Jonathan is a something of a tweener. It may be that King’s best path to playing time is stay in the middle and shift to wherever he’s needed based on the injury situation. As it stands, with almost all of last season’s defensive line back, plus the arrivals of Jovan Swann and Damarjhe Lewis, King will have to fight for playing time.

Where He May Fit: This ranking changed based on Tom Allen’s comments earlier this week. It sure sounds like Haggard has the inside track to be the first tackle off the bench if something happens to starting tackles Matthew Bedford and Caleb Jones. There’s certainly still time for fellow JuCo transfer Chris Bradberry or redshirt sophomore Aidan Rafferty to supplant Haggard. In an ideal world, Haggard would have a little more time to put some bulk – he’s currently listed at 275 lbs, which is a tough size for taking on B1G East defensive ends.

Has: Special teams chops. Casey was a regular on kickoff coverage and other special teams units in 2019. For a program that has developed some depth and also isn’t afraid to use starters on special teams, the fact that Casey was out there regularly demonstrates the coaching staff’s trust in him.

Shows: Raekwon Jones’-type size and strength. Seriously, Casey is almost exactly Jones’ size at 6’2, 234. Casey’s career may well end up similar to Jones’, who became a second-teamer as a redshirt sophomore and then started at WLB for his final two seasons. Casey is poised to back up Cam Jones at WLB in 2020. If he can show Jones-esque strength and instincts against the run, he’ll be a valuable rotational piece for Coach Allen’s defense.

Needs: Improved pass-coverage ability. I don’t doubt that Casey can develop into at least a poor-man’s Raekwon Jones, but Jones was really a two-down linebacker, primarily because he struggled against the pass. In passing downs, Cam Jones came in. When Cam Jones went down with an injury in the second half of the bowl game against Tennessee, Aaron Casey became the pass-coverage WLB, and the drop-off was noticeable. If Casey wants to be a three-down LB (particularly if Cam Jones was to miss any time with an injury), his skills against the pass — including blitzing — will need to improve.

Where He May Fit: For true 1st and 2nd down tailbacks, Tim Baldwin is currently No. 3 on the depth chart after Stevie Scott and Sampson James. Given the likelihood of injury at running back, it’s a near lock that Baldwin will see significant time in 2020. Even without an injury to Scott or James, I wouldn’t be surprised if Baldwin sees some action in the first few games of the season.

Where He May Fit: If there was a star of the COVID-shortened Spring Practice, it was Lewis. Lewis enrolled early, and in just a handful of practices, appeared to make a strong impression on the coaching staff. In the few videos that IU put out, Lewis was pushing upperclassmen around. At this point, it will surprise me if he’s not in the regular DL rotation as a true freshman.

Has: Reliability for days. Thomas Allen is going to be in the right spot. He’s not going to make mental mistakes or commit silly penalties. Coach’s son, etc.

Shows: While Allen doesn’t have fellow MLB Micah McFadden’s athleticism or James Miller’s strength, he’s not some walk-on. He’s a legit Power 5 linebacker (if not a starter), and he’s flashed some playmaking ability in a reserve role the past two seasons. And for most of 2019, he was the first sub for McFadden, not Miller.

Needs: Because he doesn’t have skills that jump off the screen like McFadden or Miller, Allen has to do everything well. In the past, his pass coverage and lateral quickness have probably been a tick below B1G average. If he improves on those skills, he’s continue to push his MLB compatriots.