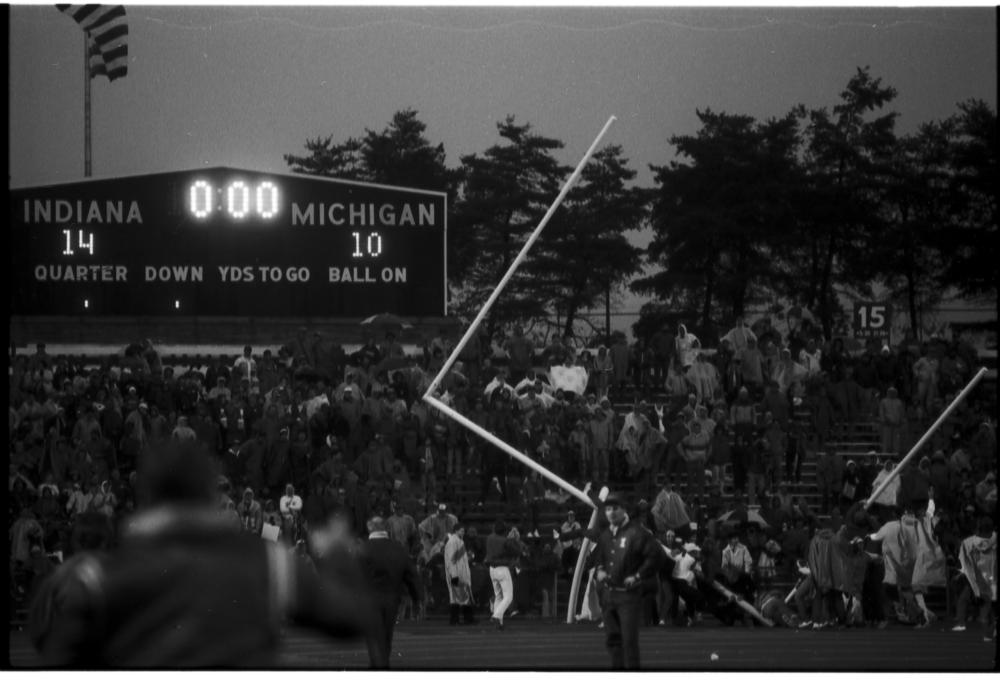 Indiana plays host to Michigan this Saturday as the Hoosiers hope to end their 24 game losing streak to the Wolverines. They’ve been so close before. The overtime loss in 2017. The double overtime loss in 2015. The Denard Robinson / Ben Chappell duel in 2010. The Bill Lynch gum toss game in 2009. Simply put, the Hoosiers have had chances in the last decade. It’s time to finally finish.

A year ago, Indiana was 12th nationally in average first quarter points scored at 9.1 points. This season, it has been Indiana’s worst quarter by far. The Hoosiers have managed just a single field goal in the first quarter over 2 games. Much of the issues are a result of execution, specifically in the passing game. Against an evenly-matched Michigan team, it will be important that the Hoosiers aren’t playing catchup all game.

A scoring opportunity comes when a team has a 1st down inside the opponent 40 yard line or scores from outside the opponent’s 40. This year Indiana is averaging 5.6 points per scoring opportunity, up from 5.0 in non-garbage time a year ago. The 5.6 mark is by far Indiana’s best in the last 5 years. They’ve done it by making sure they get points on the board when they get deep into the opponent’s territory. On 13 drives, IU has scored 8 touchdowns and settled for 5 field goals. The 61.5% TD rate is right in line with the 60.0% mark that Indiana managed a year ago. What is different is that the Hoosiers are settling for field goals at a higher rate, 38% to 29% last year. Of their 5 field goal attempts, none came on a 4th and 1 or 2 where you’d think about going for it. In fact, 3 of them would be considered 4th and long. Obviously kicker Charles Campbell hasn’t missed yet, so when IU does attempt a field goal they are coming away with points. But Indiana has also avoided turnovers on their scoring opportunities which will be important this weekend. Last year against Michigan, Indiana averaged 7 points per scoring opportunity. Unfortunately, they were missing the other part of the equation which was opportunities. The Hoosiers generated just 2.

The Hoosiers have a paltry 27% non-garbage time conversion rate on 3rd down so far this year. That’s worse than the 2014 IU team that thrust freshman Zander Diamont in at QB for half the year. Last year Indiana was at 47%. A main problem this year has been a result of 1st and 2nd down. Indiana is facing a 3rd and long on 68% of their 3rd downs, up significantly from 53% last year. They’ve also faced a lower percentage of 3rd and short downs. As a result of Indiana needing more yards to convert the first down, they are failing much more frequently. As important as it is to keep drives going with 3rd down conversions, avoiding obvious passing situations against Don Brown’s blitzing Michigan defense might be equally important. The Wolverines are allowing a conversion on 39% of 3rd downs.

The Hoosiers have recovered 3 turnovers in each of their first 2 games. The 3 turnovers recovered per game is tied for 3rd nationally, but is not sustainable as mentioned yesterday. It could drop as soon as Saturday against a Michigan team that has not lost a turnover through 2 games. It’s worth noting that just as Indiana has been lucky in the turnover department on defense, the same case could be made for the Michigan offense. Using Bill Connelly’s expected turnovers which utilize passes defensed and fumbles, Michigan’s total expected turnovers lost is 2.69.

The Hoosiers have allowed just 5 total plays of 20+ plays which is tied for 5th nationally on a per game basis. Michigan is averaging 4.5 plays of 20+ yards through 2 games which is middle of the pack. Last year the Wolverines put up 7 such plays on Indiana including 3 to Nico Collins. He opted out of the 2020 season and Donovan Peoples-Jones, who had 1 such play, went to the NFL. However, Ronnie Bell is back at receiver and has 2 such plays thus far.

Vegas has #23 Michigan as a 2-point road favorite over #13 Indiana this week. Bill Connelly’s SP+ rankings have Michigan as a 1.7-point favorite. But because the Hoosiers are oh so close to being a top 10 team, let’s go there instead. If you are taking the under, you’re picking Indiana to be a top ten team in the AP poll on Sunday. That would require an Indiana win and probably some losses ahead of them. One-loss #8 Florida plays one-loss #5 Georgia so one of those teams is guaranteed a second loss. #9 BYU is a 2.5-point favorite against #21 Boise State. Obviously Notre Dame and Clemson face off, but it’s hard to imagine either team falling out of the top ten. But still, there’s a chance.