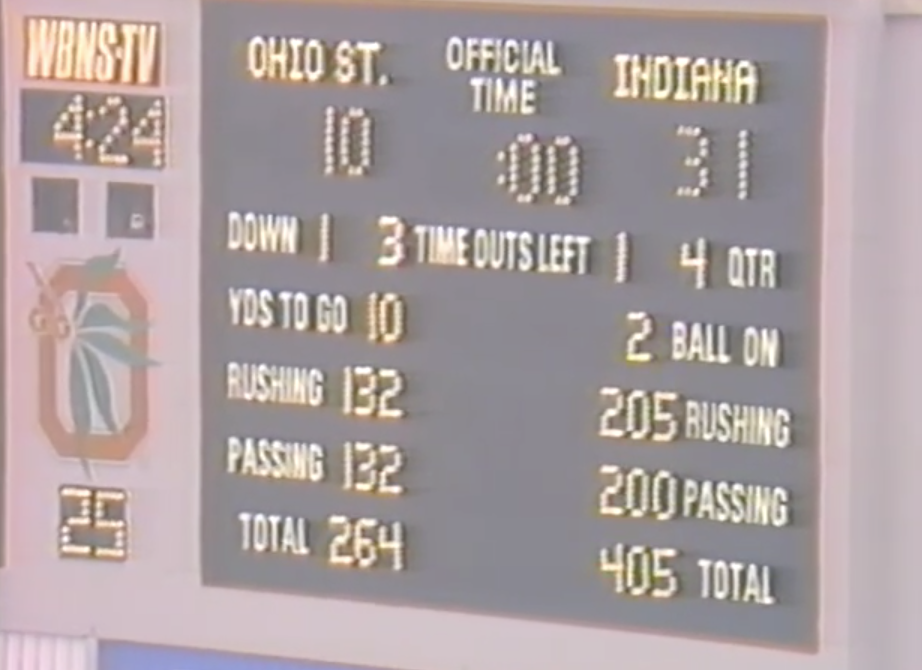 The last time Indiana won in Columbus the Hoosiers were led by a coach in his 4th year at IU, against a top 10 OSU team, in the 5th game of the season…

Indiana heads to Columbus as the #9 team in the AP poll and a 20.5-point underdog to #3 Ohio State. Vegas expects a blowout, but Indiana has positioned itself to pull off the upset. The Indiana defense is legit as we’ve come to expect under Tom Allen. They’ve been great at forcing their opponent into a mistake. On offense, the Hoosiers have a talented quarterback, a pair of very capable receivers and a tight end that mostly catches the underneath stuff. The pieces are in place but there isn’t a big margin for error.

As such, we’re going to base this week’s lines on Bill Connelly’s Five Factors. Some of the metrics used have been adjusted since Connelly first published them in 2014, but the principles remain the same. As Bill wrote, “the sport comes down to five basic things, four of which you can mostly control. You make more big plays than your opponent, you stay on schedule, you tilt the field, you finish drives, and you fall on the ball. Explosiveness, efficiency, field position, finishing drives, and turnovers are the five factors to winning football games.”

All these lines (except for the last one, obviously) will be for non-garbage time only. On the first five, an over bet would be positive for the Hoosiers. A under bet would indicate a Buckeye advantage in that category.

On the year, Indiana’s isoPPP margin is actually -0.04. The offense has been fine with an isoPPP for 1.30, just slightly below the 1.32 they posted in 2015 and 2016. But the defense is allowing an isoPPP of 1.34, the worst since the 2015 defense. The problem for Indiana has been occasional lapses in allowing big plays. The Hoosiers are great at takeaways. They are good at getting opponents off schedule. They’ve just allowed a couple big plays, most notably the 60-yard pass that gave Penn State a 21-20 lead. The Indiana defense is at its best in forcing the opponent into a mistake. Those mistakes don’t happen if the opponent is picking up major chucks of yardage at a time. They occur when opponents are forced to methodically move downfield. On the year, Ohio State has 9 plays of 30+ yards in 3 games

Success rate measures efficiency, the offense’s ability to both stay on track and avoid obvious passing situations as well as continually pick up first downs. A strong success rate helps in a couple of ways. First, by continually picking up first downs you are continuing to move closer to the end zone and maintain possession of the ball. Second, by maintaining possession of the ball you keep giving yourself an opportunity to convert an explosive play. It’s hard to have explosive plays if you don’t have the ball.

Indiana has been slightly below average on offense with a 40% success rate. Since 2014, Indiana has averaged 42% with a high last year of 46%. It’s not surprising that they’ve been particularly poor in rushing success rate at 37%, below their 7-year average of 41%. Indiana isn’t going to beat Ohio State by running all over them. But it is important that they run efficiently, picking up 3rd and shorts, because that gives the passing game more opportunities to make a big play.

On defense, Indiana has been quite strong, allowing just a 34% success rate. They have been stout against the run, allowing just a 33% success rate far below the 42% mark since 2014 and better than the previous best of 38% in 2016. Indiana could excel here as Ohio State has yet to post dynamic rushing stats. Indiana’s pass defense has allowed a 35% success rate, tied for the 2017 team for the best since 2014 and better than their 7-year average of 40%. They’ll be facing the best QB they face all year in Justin Fields.

Finishing drives involves both putting yourself in position to score as well as actually scoring. The former is partly a product of your efficiency and explosiveness. If you can’t move the ball, you won’t end up with a scoring opportunity. The goal is to have both a high number of scoring opportunities as well as finish when you do get deep into opponent territory.

The Hoosiers went 21 straight scoring opportunities to open the season before failing to score on one. Last week Indiana left points on the board with an interception, a missed field goal, and two failed 4th and shorts. Indiana might need to go for it on 4th and short again this week as field goals might not beat the Buckeyes. But they’ll need to convert. Defensively, Indiana has been good so far at not breaking once the opponent is deep into IU territory. Ohio State is going to get scoring opportunities this week. If Indiana can either force turnovers or force the Buckeyes into a field goal attempt, it will be a huge boost to their chances.

Having a short field can be a huge benefit to the offense. Likewise, trapping the opponent deep can greatly benefit a defense. On the year, excluding overtime, Indiana is +3.5 in starting field position margin. In no game was it more apparent than last week when IU had a +25 yard advantage. Either it be a big kick or punt return or simply resulting from a turnover, a field position advantage can help trim some of the disadvantages a team faces.

The oblong ball can take some very funny bounces sometimes. On average a team recovers about 50% of the fumbles. On average a team intercepts a pass on 22% of passes defensed. Right now Indiana’s defense is exceeding expectations in the turnover department. It’s been huge for them. But they face a massive test in Justin Fields who has tossed just 3 interceptions in his entire career. He has thrown an interception on just 0.6% of his passes! For reference, Michael Penix is at 2% in his career which is pretty good. To say Fields is elite is an understatement.