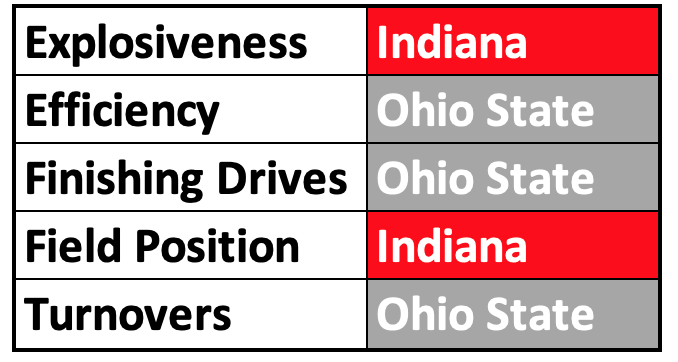 It was a potential blowout that came down to the final few drives. Ultimately, Ohio State won 3 of the 5 factors and the game.

If there was one thing keeping the Hoosiers in this one, it was big plays. Outside of a slow first quarter for the Indiana offense, a half dozen big plays for Indiana gave them a chance. These weren’t your garden variety explosive plays of 20-some yards. They included passes of 68, 51, 63, and 56 yards. These 6 plays accounted for 296 yards, roughly 60% of Indiana’s offense.

Ohio State had a higher percentage of explosive plays but other than the 65-yard pass to Garrett Wilson and a 41-yard run by Master Teague, no other Ohio State play went for 40+. The goal of this metric is to measure how big your big plays are and on Saturday, the Hoosiers had the advantage.

Indiana was dismal offensively in success rate at just 36%. It’s been an issue for Indiana all season, particularly in the running game. Indiana doesn’t need Tevin Coleman-like rushes and gaudy yards-per-carry numbers to be effective on offense. Indiana’s 10 carries on 1st down gained a total of 15 yards with only 1 successful carry and 4 of them stuffed for a loss or no gain. The Hoosiers aren’t going to win games by running the ball, but they do need to be better than that. The Hoosiers are gaining just 2.9 yards per carry on 1st down rushes by running backs this season.

Defensively, Indiana allowed a 49% success rate which was their worst since the 2019 Michigan game. Ohio State is really good with an elite quarterback so it wasn’t too surprising. If there was one area slightly surprising it was how well the Buckeyes performed on the ground. They had a 46% rushing success rate, well above the 33% that Indiana had allowed thus far. Obviously Ohio State’s backs and offensive line are better than what Indiana had faced thus far, but it was still a high rate. I suspect missed tackles played a part.

Indiana had 6 scoring opportunities, scoring a touchdown on 5 of them. Ohio State had 7 scoring opportunities, also with touchdowns on 5 of them. The result for both teams was 35 points with Indiana finishing their drives slightly better and Ohio State generating 1 additional opportunity. For Indiana, it continued a season of remarkable success in finishing drives. The only opportunity in which they failed was the costly David Ellis fumble. For Ohio State, they closed the 1st half and started the 3rd quarter with 4 straight scoring opportunities that they cashed in for touchdowns. After that, they only had 2 more opportunities and failed to score on both. The first was on a missed field goal and the second was on a turnover on downs. Their failure to finish drives in the second half helped give Indiana a chance to get back into it.

The Hoosiers had a slight advantage here but nothing too impactful. There was only 1 drive for either team that started in opponent territory. That came on Indiana’s 3rd drive following Jamar Johnson’s first interception. There would have been a second had he not fumbled on his second interception, but I digress.

The box score says -1, but the last one came on Indiana’s final lateral play. Either way, Indiana didn’t win the turnover battle. While the Hoosiers picked Justin Fields off 3 times, likely more than anyone would have bet American dollars on, Indiana failed to capitalize by losing 2 fumbles and an interception of their own (of course, one of the turnovers was committed by a defensive player. Digression #2). The last time Indiana lost 3+ turnovers in a game was against Minnesota in 2018. Tom Allen preaches the importance of creating turnovers on defense and limiting them on offense. For the most part, Indiana has backed that up. Unfortunately, on Saturday it just didn’t go their way.

Indiana fell behind 35-7, and an OSU cover appeared to be a lock. Then, IU’s second-half run almost led to a victory. While they ultimately fell short of the overall goal, they did end up covering by a healthy margin.