In a video posted to Twitter on Sunday, Defensive Coordinator Kane Wommack told him team, “you truly are a special group and we’re doing special things.” While part of that statement was probably said for motivation, getting the team ready to focus on Maryland after a tough defeat against Ohio State, there’s a lot of truth in his words.

Indiana leads the nation in interceptions per game at 2.60. They also have the best interception to pass attempt ratio of any team since at least 2009.

By a wide margin.

The pieces were in place for a breakout. The Hoosiers have 3 cornerbacks with good to elite coverage skills in Jaylin Williams, Reese Taylor and Tiawan Mullen. They have a playmaking safety in Jamar Johnson. And while they don’t have an elite pass rusher, they have enough talent combined with Kane Wommack’s play calling to get pressure on the opposing quarterbacks.

The proof is in the pudding.

Indiana has either 2 or 3 interceptions in all 5 games this season. Eight different players have intercepted a pass including 2 linemen and 1 linebacker.

While this output is extremely exciting and a part of why Indiana’s defense has been so solid this year, it’s probably not sustainable. That’s not to say Indiana can’t continue to be elite in this area. But right now the Hoosiers are intercepting 8.07% of the pass attempts faced. The next highest ratio this year is 6.38% by Cal, but they’ve only played 2 games. Iowa is next highest at 5.65% in their 5 games.

Since 2009, the highest interception to pass attempts ratio recorded by a defense was the 2011 North Carolina team at 6.63%.

Graphing the interceptions to pass attempts for every FBS team from 2009 to 2020, you can clearly see how Indiana is massively outpacing any recent precedence.

Can it continue? That’s the million dollar question.

The answer depends on your definition of continue. Will Indiana post an interception to pass attempt ratio north of 8% the rest of the way? Highly, highly doubtful. These kind of stats generally regress back towards the mean at some point.

Looking at Indiana’s 5-game (since the season is 5 games so far) rolling average of interceptions to pass attempts since 2009 illustrates what generally happens. There is usually a peak followed by a period of decline. It’s difficult to sustain a level of eliteness over a long period of time.

On average, teams force an interception on roughly 2.9% of passes they face. Indiana has hovered around that mark since 2009 with some periods above and some below. Their actual average over that time period is 2.7%.

Right now, the Hoosiers are on a historic peak. Their 5-game average is the highest it has been during this 12-season sample. The next highest peak occurred at the end of 2009 into the start of the 2010 season. The Hoosiers had 10 interceptions over 5 games including 5 in a loss to Iowa1. In their next 5 games they had just 3 total interceptions dropping from a 7.2% interception rate to 2.1% on a 5-game average. On the other hand, valleys are often followed by some sort of peak, even if IU’s “peaks” traditionally haven’t been too lofty. As shown in the chart below, last season, IU’s interception rate was well below average at 1.78%, with very similar personnel (albeit with Jamar Johnson playing less and in a different role). There’s an argument that IU was due for a jump this season, but this defense has clearly gone well beyond what anyone could have expected.

What is likely to happen over the final 4 games and a bowl game is a decrease from the current peak. By how much is the question. 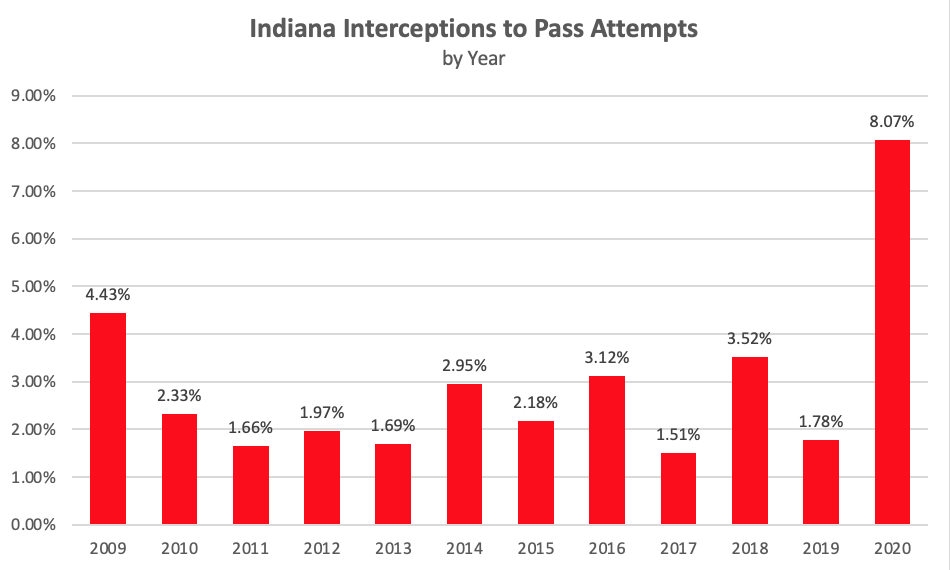 Even if Indiana faced the same 161 attempts they have seen thus far and failed to intercept a single pass, the Hoosiers would post their 2nd best mark in the last 12 seasons. That seems very unlikely given Indiana’s personnel.

What’s more likely to happen is Indiana posts a mark closer to the 2.9% national average. If IU did that over their next 161 pass attempts faced (and obviously they could face more or fewer attempts), their season-long average would fall to around 5.5%. That level of production would still rank in the top 98 percentile among all FBS teams from 2009-2020. That’s elite.

It also means we should expect fewer interceptions going forward. It’s possible with the shortened season that teams post extreme performances because there are fewer games required to sustain their production. But even with Indiana’s personnel and play calling, a drop is most likely.

The good news is Wommack’s SwarmD is pretty good even with a dip in interceptions. While prone to give up the occasional big play, they have been a solid unit. And that is something we can all be thankful for.