In case you haven’t heard, Michael Penix is having himself a nice little start to the 2020 season. Today we’ll rank his performance in IU’s five games from worst to best, as well as take a look at his season-long stats to date.

To evaluate Penix’s passing, we’re going to use two charts for each game. One is what we’ll call a pass report card, and the second is a passing breakdown chart similar to what we’ve used here through the years. Here’s a quick guide to abbreviations used in the charts:

AC = accurate passes. The pass hit the receiver in the numbers or in stride. A pass one would expect a B1G receiver to catch it at least 9 times out of 10.

W = passes that are wide of the target – generally for a stationary target like a receiver on a comeback route or sitting down in a zone.

UN = uncatchable. This captures the number of UT/OT/W passes that, as the name implies, simply can’t be caught. This stat recognizes that some passes that are somewhat off target can nonetheless be caught, and we want to separate those from passes where the receiver simply had no shot.

AC% = Accuracy percentage, as you might have guessed, is the percentage of passes that are classified as accurate. Because receivers occasionally drop accurate passes, this is a better measure of true accuracy than completion percentage.

CA% = Catchable percentage. Generally slightly different than AC%, this shows the percentage of passes that are catchable (the inverse would be the “uncatchable rate”).

DRP = Drop. Saving a whole letter with this one. Efficiency!

In the passing breakdown, passes covering 21 or more yards through the air are classified as deep, 11-20 yds are intermediate, 10-1 yds are short, 0 or less are LOS (line of scrimmage).

Everything you see here excludes garbage time (so far, just the second half against Michigan State), as well as passes batted down at the line and throwaways. We also don’t include the touch pass/end arounds that IU runs a few times a game because we classify those as runs.

Speaking of running, we’re only grading based on Penix’s passing here, but it’s not like we are ignoring all that much by ignoring Penix’s runs. Excluding sacks, Penix has run the ball just 9 times this season, of which 2 were scrambles. Ironically, Michael’s most famous play of 2020 was a scramble for the game-winning 2-point conversion against Penn State. That would have been just his 3rd scramble, if it counted in the official stats. Tom Allen and his offensive coaching staff have plainly made limiting hits on their prized QB a priority. At some point, they may need to loosen this up a bit to help improve the rushing attack, but that’s a post for another day. 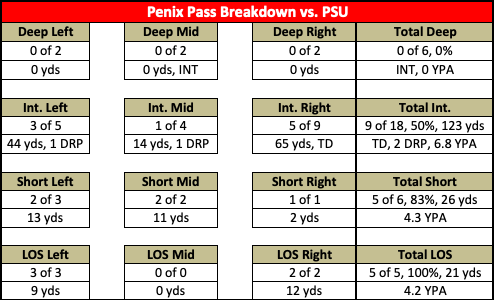 A few things jump out here. First, for as bad as Penix (and the entire offense) looked for much of this game, more than three-quarters of the passes he threw were catchable. That percentage is tied for 2nd best on the season for Penix, behind only an 88% catchable percentage vs. Rutgers. In the pass breakdown, given his downfield performance in the other games, it’s hard to believe Penix did not complete a single pass beyond 20 yards downfield against the Nittany Lions. It’s that lack of downfield success, combined with the INT, that place this performance at #5. That said, it’s also worth noting that Penix got very hot when it counted: his last 9 passes, covering the last drive of regulation and OT, were accurate. 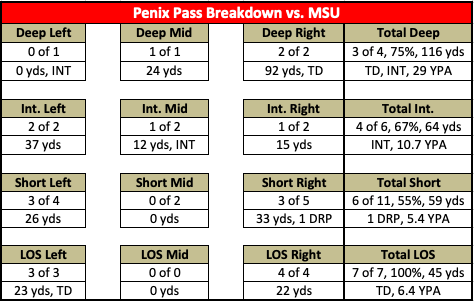 Due in large part to the IU defense’s dominance of the woeful Sparty offense, the entire 2nd half of this game was garbage time. Penix’s 1st half wasn’t bad by any stretch – he approached 80% in accuracy percentage, and he completed 7 of his 10 passes that traveled more than 10 yards downfield. The problem was two of the three incompletions in that downfield group were interceptions. In each instance, the intended receiver was single-covered, and particular in the second instance, the receiver had a step. That’s why neither is classed as “into coverage,” and instead were an overthrow (on the first) and an underthrow (on the second). If Penix had avoided those interceptions, this one might have been in garbage time midway through the 2nd quarter. 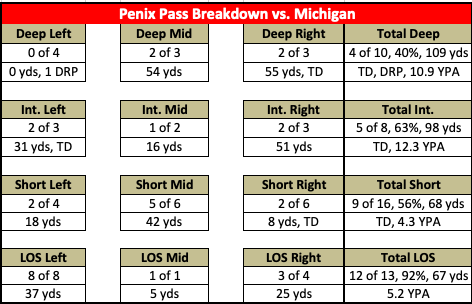 While Penix was unquestionably very good in the 1st half, racking up three TD passes, he was a little shaky in the 2nd half. Only 7 of his 16 2nd half passes were accurate, and he closed on a streak of 5 straight uncatchable passes. Overall, his 62% accuracy percentage is the worst of the season. Although Penix didn’t throw a pick against the Wolverines, he got some help on that from the Michigan secondary, who dropped a couple possible interceptions. That said, Penix did damage down the field when IU was in the process of building a healthy 1st half lead, including two complete dimes for TDs. 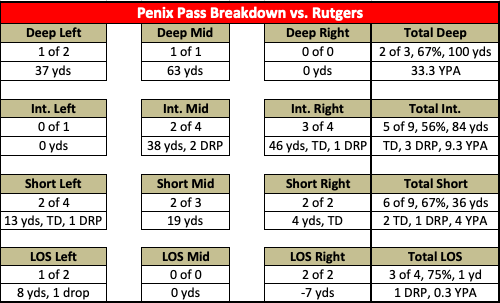 Penix was at his most accurate against the Scarlet Knights, and his receivers finally decided to catch those accurate passes in the 2nd half! IU receivers dropped five accurate Penix passes in IU’s first three possessions. To Penix’s great credit, he just kept giving them opportunities. He closed the game with nine straight accurate passes. For the entire game, Penix threw two uncatchable passes. Michael was effective downfield, and tallied three TD passes against zero interceptions. He did exactly what he should do against a lesser opponent. 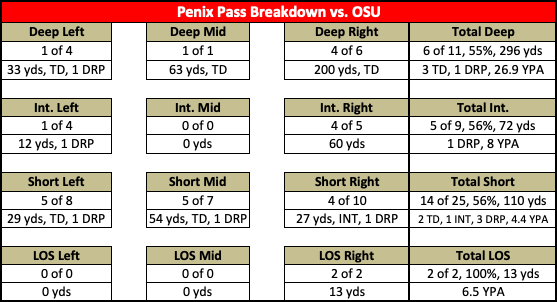 There are two reasons why this performance surpasses Rutgers: (1) the Ohio State defense, although slightly down by their own lofty standards in the secondary, remains head and shoulders above the Rutgers defense, and

(2) Penix did more damage downfield against Ohio State. As the chart to the right shows, Penix was under duress on more than 40% of his throws against the Buckeyes, nearly double the pressure rate from the Rutgers game. After almost every big throw #9 made last Saturday, he was hit by a large human wearing scarlet and gray. In the face of all that, Penix still completed 11 total passes at the intermediate and deep levels, and would have completed 65% of passes traveling 11 yards or more downfield were it not for 2 drops. From the last possession of the 1st half through Fryfogle’s last TD midway through the 4th quarter, Penix had a run of 17 accurate passes out of 20 (85%). Sure, he would like to have one of those 3 inaccurate passes back, the pick-6 to Shaun Wade, but I would argue that most college corners don’t intercept that pass, and a good percentage don’t even get a hand on it. It was a less than perfect pass against a future NFL corner. These things happen against Ohio State. 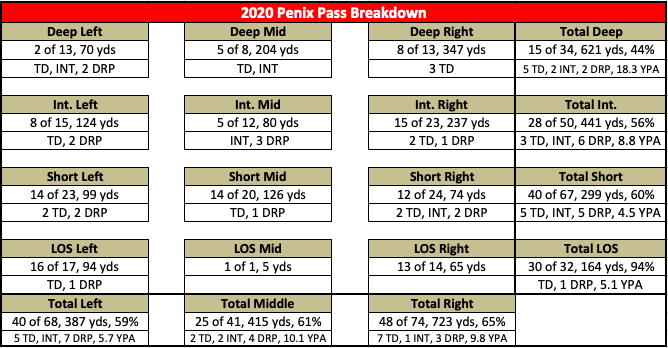 These charts mostly confirm what you already know: Penix has been good in 2020. One interesting trend that I haven’t necessarily noticed while watching live: Penix has been more effective throwing to the right side of the field – that is, across his body, what you would call glove-side if he were a pitcher – than to the left, arm-side if he was pitching. Hard to say if that’s a signal rather than noise at this point, but it’s something to monitor.1 Also, 14 drops through 4.5 games is absurd. This group of receivers is too good for that. Hopefully we see some regression to the mean on that front over the next 4 games.