Much has been made about the IU secondary’s propensity for picks, including on this site. And rightfully so, as the Hoosiers’ interception rate has been off the charts. But focusing exclusively on interceptions can diminish the all-around accomplishments of this group by leading the casual observer to believe this group is all about pass coverage or that their success is just a product of right-place-right-time. Today we’ll examine IU’s unbelievable improvement in havoc-creation – of which interceptions is only a part – from 2019 to 2020.

Last December, I wrote about the lack of playmaking among IU’s safeties in 2019, and the post included this chart: 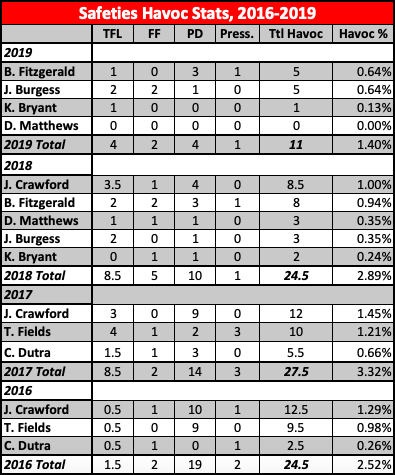 In the Gator Bowl, IU’s safeties, and particularly Devon Matthews, showed signs of life. Matthews broke up two passes. Juwan Burgess broke up another. It seemed IU’s secondary was finally getting comfortable in the zone coverages defensive coordinator Kane Wommack had been employing more and more throughout the season. There was hope for greater havoc-creation in 2020.

I also wrote this last December:

If I had to come up with a position change to help the safety position, I would recommend current second-team Husky Jamar Johnson. It’s unlikely he’ll bypass Marcelino Ball to start at Husky in 2020 (Ball’s final year of eligibility) – even though he has absolutely narrowed that gap. In brief flashes, he’s shown ball skills, and the athleticism is there.

I’m wrong so much of the time, but occasionally I’m right.

In 2020, most of the playing time in IU’s secondary went to six players (and for purposes of this post, we’re counting former safety and current husky Bryant Fitzgerald as part of the secondary): Jamar Johnson at boundary safety, Devon Matthews at field safety, Bryant Fitzgerald at husky (primarily on non-passing downs), and Tiawan Mullen, Jaylin Williams, and Reese Taylor at corner. Josh Sanguinetti, Juwan Burgess, and Bryson Bonds rotated in at the two safety spots for a few possessions per game, but between the three of them recorded only 1 havoc play, so we’ll leave them out of this analysis.

Starting with just the safeties, the jump from 2019 to 2020 is wild. Jamar Johnson’s 12.5 havoc plays in just seven games is tied for the most ever by an IU safety in the Allen Era (Jonathan Crawford had 12.5 in 2016). Devon Matthews’ havoc rate of 1.58% (the percentage of total plays that result in a havoc play) would have set a record for a safety in the Allen Era, were it not for Johnson’s 2.83% havoc rate, nearly twice the next highest. The three pressures recorded by IU’s starting safeties ties the most pressures by safeties in a season since 2016. Suffice to. say, Devon Matthews showed significant improvement over his 2019 form, and Jamar Johnson brought a level of havoc to the safety position that IU simply hasn’t had in years.

And then there were the corners. The story for them in 2019 was already positive. Tiawan Mullen’s 2019 campaign was right up there with Rashard Fant’s 2016 season as the best by an IU corner in years. Reese Taylor emerged as a physical presence opposite Mullen. Jaylin Williams didn’t really take a step forward from his strong freshman season in 2018, but he was still a good cover corner. Still, Andre Brown and Raheem Layne played quite a bit in 2019, and both represented a significant step down from Mullen, Taylor, and Williams. Moreover, while Mullen and Taylor in particularly were strong against the run, none of the trio contributed to the pass rush. IU had one pressure by a corner in 2019 (by Andre Brown). There was room to grow.

And grow they did. Kane Wommack clearly felt confident blitzing his corners, and they more than justified that

confidence, racking up 13 pressures between the three of them. That’s more than twice the total number of pressures by IU corners in the previous four seasons! Moreover, the run support flashed by Taylor and Mullen in 2019 only improved in 2020. Taylor’s 3 TFL in 7 games is incredibly impressive for a corner, and Williams and Mullen each added one as well.

Finally, in case you haven’t heard, this group also got its collective hands on the football on a very regular basis. The chart below shows coverage stats for IU’s five main secondary players – removing Bryant Fitzgerald because he simply wasn’t targeted too often in the passing game.

For reference, coverage stats1 for IU’s safeties and corners from 2019 look like this:

As a group, IU’s top 5 secondary players broke up or intercepted 35% of the targets they faced. They only allowed receptions on 43% of targets. When a secondary is recording a pass defensed almost as often as it allows a catch, it’s doing its job very well. Along with Mullen’s continued excellent play, Jamar Johnson’s emergence has really been the key. I may have thought he would be an improvement at safety, but no one could have predicted that he’d allow only 5.3 YPT, break up or intercept 44% of his targets, not allow a TD, and not record a coverage-related penalty.2 Because it can’t all be positive, there are a few problem spots that jump out: Devon Matthews’ coverage stats show a little regression from 2019 to 2020, and Reese Taylor’s numbers indicate that he may not be quite on Mullen’s and Williams’ level in coverage skills.

In sum, IU’s secondary had an incredible 7-game run. Now we will get to see how they stack up against one of the best passing attacks in college football this season, albeit one that’s missing several key weapons.