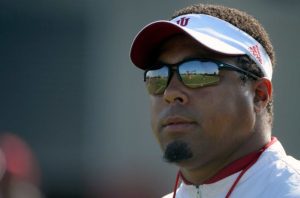 This week, we take a look at the players and coaches whose departures will have the biggest impact on IU football going forward.

This list is limited to players who saw the field in 2020 (sorry, Jordan Jakes), as well as coaches. The ranking is based on overall impact, which includes consideration of who is available to replace the departing player or coach. The better the replacement, the less impact the departure. An average player with no clear replacement may be a more impactful departure than a good player with a good replacement.  We will cover Nos. 10-5 today and continue with the top 4 later in the week.

10. Tramar Reece, WDE: That Reece is on this list is a sign of how few players/coaches are leaving or have left so far this offseason. Reece saw action in three games in 2020 when Lance Bryant was out with an injury. While Reece recorded three tackles, he didn’t record any havoc plays. That was Reece’s most extended playing time in his four years at IU. Barring injuries, Reece didn’t have a clear path to consistent playing time in 2021, so it wasn’t overly surprising to see him hit the Transfer Portal after his redshirt junior season.

9. Jovan Swann, DT: While we would have loved for Jovan to spend his entire collegiate career at IU, we’ll have to settle for one solid season. Swann was a steady part of the defensive line rotation, as he spelled Jerome Johnson at the 3-tech DT spot, appearing in 71% of possessions1 He tallied 6 pressures, 1 pass break-up, and generally held up well against the run. At this stage, it’s not exactly clear who will fill his spot (or Jerome’s, as we’ll discuss later in the week), which made it a little more painful when Jovan understandably decided to move on with this life after a brief flirtation with returning. In all, this was a good use of a grad transfer.

8. Harry Crider, C: Harry played a lot of football at IU. In 2020, he played every non-garbage time snap at center. Before that, he started 13 games as a junior in 2019 (12 at left guard and 1 at center), and appeared in 14 total games in his freshman and sophomore seasons. This past season, he led the offensive line in allowing only pressures on 2.4% of drop backs. While Crider never developed into an all-B1G caliber lineman, durability and reliability are skills, and he unquestionably brought them to the table. He might be higher on this list, but Dylan Powell – who allowed pressure on 2.5% of drop backs – is coming back for another season. I expect him to slide into the center spot and provide something pretty close to what Crider provided, if he can manage to match Harry’s durability.

7. Mike Hart, Associate Head Coach/RB Coach: There’s a reason Michigan wanted Mike Hart to come to Ann Arbor and coach running backs, and it’s not just because he was a star running back there 15 years ago. He’s a good coach. He recruits well. His players seem to like him. His players produce. That said, he was involved in a running game that largely struggled, particularly against good-to-great competition, for the past several seasons. Some of the highly-ranked recruits he reeled in either didn’t pan out (Ronnie Walker) or have yet to realize their apparent potential (Sampson James). Stevie Scott was a solid B1G back who improved as a receiver and a pass blocker, but one might realistically question whether he made any significant gains as a runner from his freshman to his junior season. And, oh by the way, Hart’s recently hired replacement is a guy who coached Tevin Coleman, Jordan Howard, and Devine Redding in (mostly) explosive offenses, before moving on to win a Super Bowl ring coaching running backs for the Chiefs. So while Hart will be missed and deserved the pay raise he received from his alma mater, I would argue that Coach Allen secured an upgrade by hiring Deland McCullough.

6. Hayden Whitehead, P: Whitehead probably didn’t get the credit he deserved in his four years in Bloomington. He was relentlessly competent. Although his leg may not have been as powerful as some, he had a knack for pinning opponents deep in their own territory. In fact, 37% of his punts pinned IU opponent inside the 20. He averaged over 40 yds/punt in all four seasons, with his last two seasons over 42 yds/punt. Shanks were rare, and blocked punts were almost non-existent. He only had two punts blocked out of 226 in his career, and none in his final two seasons. Hayden will be replaced by another Aussie punter, James Evans. While we have every reason to think Evans will be good, expecting him to walk in and provide 2021 Whitehead-level of performance is probably unreasonable.

5. Stevie Scott, RB: In his three seasons as IU’s No. 1 option on the ground, Stevie Scott was an incredibly reliable all-purpose back. He was a weapon in short-yardage and around the goalline. He turned into a decent receiver and pass-blocker over the course of his career. In all, he was a B1G-caliber starting RB, and his all-around skillset will be missed.

But there are reasons a player who is 9th all-time in rushing yards at IU, and 4th in rushing TDs is only 5th on this list. The first is that there is little evidence of improvement in running ability from his freshman season in 2018 to 2020. As the chart below shows, there’s probably more statistical evidence of regression  than progression.

Scott’s yards-per-carry and success rate dropped from one season to the next. His explosive play percentage stayed relatively constant. His highlight yards per opportunity, another measure of explosiveness, showed significant improvement in 2019, before plummeting back to any 3.6 in 2020. All that said, it is always difficult to tease out a running back’s ability or performance from that of his offensive line. The declining opportunity rate, the percentage of runs on which the back makes it 5 yards, is evidence of declining offensive line performance.2 And there is some evidence of improvement in elusiveness, as Scott broke or eluded a tackle every 7.7 touches in 2020, an improvement over 9.3 in 2018. Still, the general picture here is of a steady back, who struggles a bit with explosiveness and elusiveness, and who probably doesn’t get much help from his O-line.

A back like that can be replaced. Specifically, different backs on IU’s roster should be able to provide different components of what Stevie brought. Sampson James may be more powerful than Scott and, in limited duty, has shown similar short yardage ability. David Ellis provides receiving talent that generally surpasses Scott’s (but with some occasional drops as well). Tim Baldwin appears to be more explosive. None of them are the pass-blocker that Scott is. All of them will benefit from Coach McCullough’s tutelage. If all of them play to their potential or close to it, the running back position could easily exceed the position’s output from the past few seasons, when Scott received the majority of the playing time.

Later this week, we will analyze IU’s four most impactful departures.