Bill Connelly recently updated his SP+ ranks which has Indiana #28, obviously lower than both the AP and Coaches polls. He clearly hates IU and rumors I saw on the internet says he hates every single team except Alabama and occasionally Ohio State and Clemson. He talked specifically with CrimsonCast about why he hates IU, but you should still listen anyway!

Most of the main reasons Connelly is lower on Indiana than the general consensus comes back to Indiana getting a bit lucky in 2020 and regressing back towards the mean in 2021. Make no mistake, Indiana was a good team in 2020. But a lot went their way. For example,

As for the 2021 projections using SP+, Indiana’s most likely record is 7-5 (audible gasp).

The next mostly likely record is actually 6-6 which is where people will stop reading this nonsense. It would certainly be a gut punch if Indiana ended the season 6-6 (Wow, that was weird typing that sentence). But there’s certainly a chance, especially if Michigan (#17 in SP+) and Penn State (#10 in SP+) return to their historic form and Ohio State continues dominating the Big Ten. Then there is the road game to open against Iowa and the home game against Cincinnati. Both will be played with an oblong-shaped ball that sometimes takes funny bounces. There’s also the health of #9. Winning just 6 games would be a bit unlucky but it cannot be discounted as a possibility.

On the positive side, Vegas has Indiana’s over/under between 7.5 and 8 games and it isn’t difficult to see why. The Hoosiers have a ton of returning talent and it seems as though the offense could find another level in 2021 on a more consistent basis. The defense has playmakers and depth, an elusive combination for most of Indiana’s history.

Still, 7-5 being the most likely record is a bit surprising. I’d honestly expect it to have been closer to the original 2020 schedule which was scheduled to open on the road against Wisconsin. 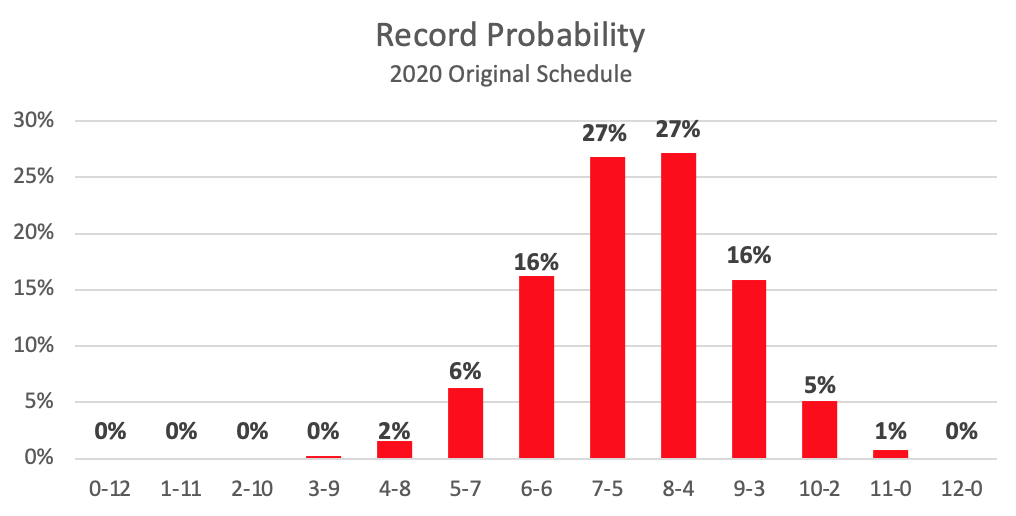 The original 2020 schedule had Indiana’s most likely record at 8-4, ever so slightly ahead of 7-5. The difference between that projection and 2021 comes back to a slight increase in the projected talent of Indiana’s opponents. SP+ projects the 2021 Hoosiers to be slightly better than the original projection for the 2020 team. 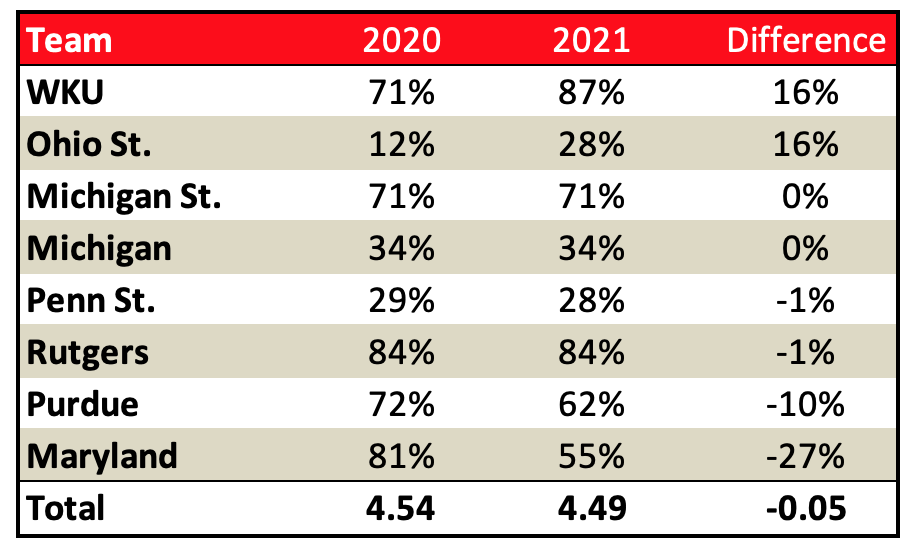 Eight of the opponents in each schedule are the same. These are the other 6 Big Ten East schools, Purdue and Western Kentucky.

There is little change outside a decrease in the likelihood of beating Maryland which is partly fueled by a change in venue from Bloomington to College Park. Essentially Indiana was projected for 4.5 wins in each season over these 8 games.

Similarly, Indiana opened both schedules on the road against a tough Big Ten West school. They also had a FCS school on each schedule. Hold on, I am now being told that Connecticut is actually a FBS school, but I digress.

There isn’t a ton of difference between these two games. The biggest change comes from the final 2 games of the schedule.

A bad Illinois team is replaced by a respectable Minnesota team. Yes, Indiana still should win, but that game moves from very likely IU victory to a tossup game.

Finally, a near-certain Indiana victory over Ball State is replaced by Cincinnati (AP #8, SP+ #19) in another tossup game. You’d certainly like to have the likelihood of victory in that game that comes with scheduling Ball State, but that Cincinnati game is sure going to be exciting in a packed Memorial Stadium.

The move from near-certain victories against Illinois and Ball State to tossups against Minnesota and Cincinnati is the driver of these lower win probabilities. If you replaced 2021 Minnesota with 2020 Illinois and 2021 Cincinnati with 2020 Ball State, the projections are nearly identical to 2020 with 8-4 being most likely, ever so slightly above 7-5.