First, we should acknowledge that it’s highly unlikely any one IU defender will replace Jamar’s 2020 production (at least on a per-game basis). The guy had a truly exceptional seven-game stretch.1.
There were other changes to the 2019 defense that contributed to the 2020 defense’s improvement over its predecessor, but for my money, Jamar Johnson was the driving force.

He created “havoc” (tackles for loss, forced fumbles, passes defenses, and QB pressures) at a higher rate than any IU safety in the Allen Era. He didn’t allow a single TD in pass coverage and held receivers he was covering to less than 5 yards per target. He recorded 8 passes defensed without getting called for a single coverage penalty. Simply put, Jamar was everywhere.

And he also played a lot, appearing in 84% of IU’s defensive possessions. The only other player who saw meaningful time at Johnson’s boundary safety position was Jamar Burgess, and, as you might expect, there was a drop-off in production.

Even though Burgess returns, going into Fall Camp, the most likely 1st-team replacement for Johnson appeared to be Raheem Layne, and just yesterday, Layne appeared as the starting BS in the Week 1 depth chart. We haven’t seen Layne on the field since 2019, and he’s never played safety. He converted to safety during spring practice in 2020 and looked likely to contribute at BS in 2020 before a knee injury ended his season in Fall Camp. From 2017-2019, Layne started 13 games at corner and played in all 37. In that time, he was a perfectly adequate corner. The coverage stats below show that while he wasn’t getting torched on a regular basis – a 7.8 career YPT isn’t bad – he also wasn’t really a playmaker – averaging 1 pass defensed per season leaves something to be desired.

Top-end speed seemed to be lacking so in that sense, this change should help him. That said, at corner, he never demonstrated the nose for the ball that Jamar Johnson unquestionably has. The hope is that a different position, and his cover skills from his days at corner, will bring that out.

Burgess checks in as No. 2 on the BS depth chart. Like Layne, he’s played quite a bit of football in his time at IU. From 2018-2020, Burgess has appeared in 31 games, including seven starts. Also like Layne, his impact hasn’t always been felt, but he’s also made key plays – most notably his effectively game-clinching forced fumble and recovery against Maryland in 2019. For comparison’s sake, Burgess and Layne, in six seasons between them (3 each), have combined for 14.5 havoc plays (8 for Burgess and 6.5 for Layne), or exactly one less havoc play than Johnson put up in seven games in 2020. There are of course caveats there for playing time and position, but if IU is counting on significant havoc-creation from a platoon of Layne and Burgess, it isn’t necessarily supported by their track records.

After Burgess, another name that could pop up is late-arriving Ole Miss transfer Jonathan Haynes, currently listed 3rd on the depth chart. I suspect it may take a game or two for Haynes to break into the rotation, but he has 17 games of starting experience in the SEC, so he should carve out a role for himself. Josh Sanguinetti could also see some time. I would be shocked if any one player sees a level of playing time approaching Johnson’s 2020 percentage. This seems primed to be a committee approach.

Jamar Johnson showed that boundary safety is a playmaking position in Coach Allen’s defense. Whatever combination of players attempt to replace him, they likely need to create havoc for the IU defense to stay at its 2020 level.

(2) What will Marcelino Ball contribute?

When we first saw Marcelino, he was all over the field in his first collegiate game against FIU in 2016. Lino was ready to contribute on Day 1. By the middle of that season, however, opposing offenses figured out that Ball could be attacked in the passing game. Despite playing Coach Allen’s Husky position, a hybrid linebacker/safety, Ball was more of a linebacker when it came to coverage. Since then, Ball’s career has been a bit of a roller coaster.

If you had told me in September 2016 that Ball would play three more full seasons at IU and not even make 2nd team All-B1G, I wouldn’t have believed it. Somehow, Ball has struggled to take his game to the next level, and changes to defensive philosophy (specifically, increased specialization) have cut into his playing time. Moreover, the talent of the IU defense has grown up around Ball significantly in his 6 years in Bloomington. His size, speed, and athleticism jumped of the screen in 2016 relative to his teammates. They don’t anymore, but that has everything to do with increased talent level around him.

Nevertheless, by all accounts Ball is healthy and ready to contribute in 2021. The question is how much can we expect from him? IU still has three good-to-great corners in Tiawan Mullen, Reese Taylor, and Jaylin Williams. If healthy, all three need to be on the field on passing downs. Could Ball move to a linebacker spot on passing downs? Conceivably, but I’m not convinced he’s a better combination of blitzing and coverage skills than Cam Jones or Micah McFadden. I don’t think the rush specialist experiment will be tried again. IU has better options there now, and it didn’t work the first time. Last year’s regular Husky, Bryant Fitzgerald, came off the field against heavy formations in favor of Jones, with James Miller coming in at MLB and McFadden moving to WLB. I will be surprised if Ball comes out in those situations this season. In all, I expect Ball to play quite a bit on early downs and against run-heavy opponents. While he’s a cog in a much more talented wheel now, he remains a valuable cog. He can absolutely still impact a game, and IU is lucky to have him back.

(3) Who’s generating pressure on the DL?

Just two times in the Allen era at Indiana has a defensive lineman recorded a sack in 50% or more of the games in a given season. In 2017, Robert McCray had 6 sacks in 12 games and last year Jerome Johnson had 4 in 8 games. Sacks aren’t the be-all end-all, but it does help demonstrate the lack of a top-end pass rusher since Allen arrived. I very much doubt that has been by design and hopefully as recruiting rises, Indiana will add the elite pass rushers that end up hearing their names called on draft day. Until then, Indiana will continue to do what is has done under Tom Allen – rely on a committee of pass rushers from all over the field. Last year of the 10 players to record 4 or more pressures, 4 were linemen, 3 were linebackers, and 3 were in the secondary. This all-over approach seems likely to continue. 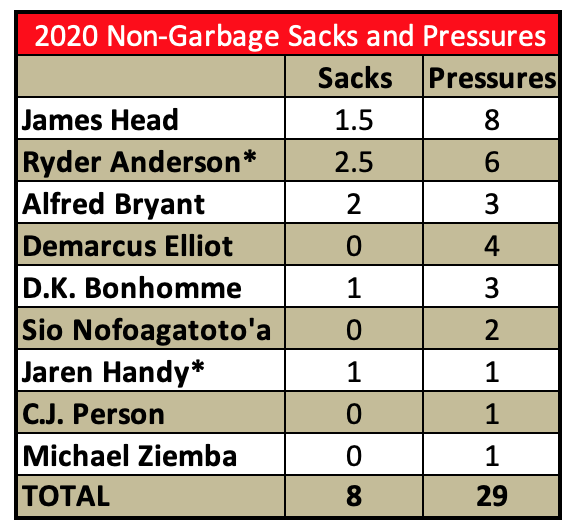 * Anderson and Handy’s stats reflect total stats, not just non-garbage, and are reliant on official scorer decisions as to QB hurries, rather than PJP’s own film-review pressure tabulation.

Having said that, if Indiana can get pressure up front, the whole defense is elevated. The position to focus on is defensive end (formerly known as strongside defensive end or SDE, before weakside defensive end officially became known as “Bull”) with Ryder Anderson and James Head set to rotate. Head has flashed potential in his 3 years at Indiana, but, somewhat surprisingly, has just 4 career sacks. In 2020, he led the defensive line in pressures and was second in havoc plays. The addition of Ryder Anderson only adds to the potential of that position. James Head led the defensive line in the number of drives he saw playing time in last year at roughly 88% of the non-garbage drives. That’s a lot for most players, let alone a defensive lineman. With his experience in the SEC, adding Anderson should decrease Head’s playing time, but make the position as a whole fresher and able to generate increased pressure.

Outside the SDE position where you feel reasonably comfortable, the rest of the line is relatively unproven in terms of generating pressure. Jerome Johnson, Indiana’s best lineman at pressuring the QB (and lots of other things), is gone leaving a huge void inside. Johnson not only led the team in non-garbage sacks, but was Indiana’s top lineman in havoc rate. Demarcus Elliot appears to have the inside track to replace Johnson but he hasn’t gotten pressure on the QB as well as his predecessor. At the bull position, perhaps Alfred Bryant or D.K. Bonhomme take the next step in their development, but it’s difficult to feel confident that it will definitely happen. Based on recent commentary from Coach Allen and others on the defensive staff, Auburn transfer Jaren “Stone” Handy could make a real impact on passing downs from the Bull spot. What’s most likely is occur is the defensive line produces adequate pressure similar to past seasons with other players from other position groups filling in the void.

(4) Is Micah McFadden the best LB of the Allen Era??

When Tom Allen arrived at Indiana in 2016, his best defensive player was linebacker Tegray Scales. The junior from Cincinnati had stepped in from day 1 and quickly became a bright spot on an otherwise poor Indiana defense. Under Tom Allen, his performance soared and helped elevate a laughingstock defense into a respectable unit. After two strong seasons Scales graduated. That fall, a freshman from Florida showed up. Micah McFadden didn’t start in 2018 as he played behind Dameon Willis, T.D. Roof, and Raekwon Jones while splitting time with fellow freshmen Thomas Allen and James Miller. McFadden took hold of the MLB position in 2019 and has quickly become one of Indiana’s best players.

The question of who has been the best linebacker to play at Indiana under Tom Allen is interesting, even if it ultimately means nothing. Right now, I think you’d have to give to edge to Scales. Not only does he have an additional season

on McFadden, but he played and was more productive as a freshman. Having said that, McFadden quickly closed the gap on this discussion by putting up an incredible junior season on par with what Scales did in 2016.

We can quibble about his missed tackles and certainly Scales had a lower missed tackle rate, but there’s no questioning the greatness of McFadden’ ability to get into the backfield and generate havoc. If McFadden can put together the type of season we all expect from him, it seems likely that we will crown him best LB of the Allen era.