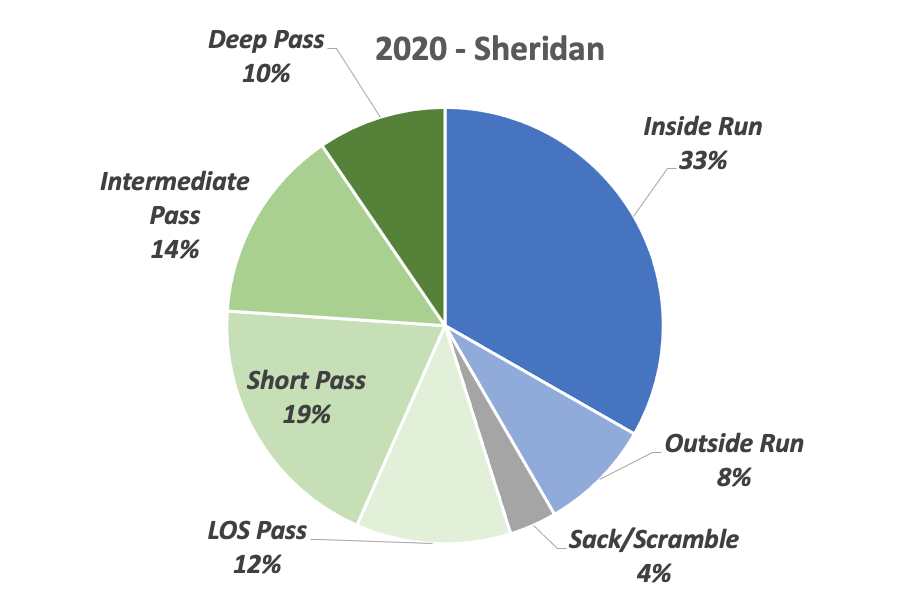 On the eve of IU’s 2021 season, we’re back to answer four key questions facing offensive coordinator Nick Sheridan and his offense.

(1) What is a Nick Sheridan Offense?

The short answer is we really don’t know! We have 5 and a half games in which Nick Sheridan was calling plays with his #1 QB, and then 2 and a half after that. That’s all. With such a limited sample size, the best place to turn for insight is a coach’s mentors or influences. Mike DeBord is probably the main one, both in terms of Nick’s playing days at Michigan and his coaching career at Tennessee and IU. There’s also some Rich Rodriguez and Willie Taggert (from the Harbaugh tree) in there too, flavored with one year of Kalen DeBoer.1

You can see the similarities to DeBoer’s and DeBord’s offenses, at least in play type. 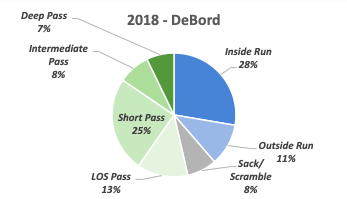 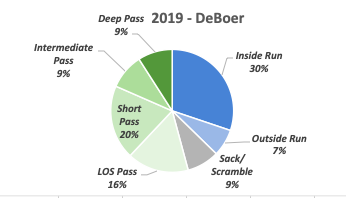 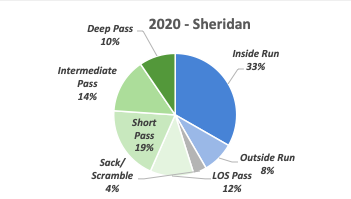 If anything, Sheridan’s offense was a little more aggressive downfield than either of his predecessors. Runs between the tackles remained the most common type, with outside runs continuing to be limited (and most of those were zone-read keeps by the QB). Of course, the bubble screens function as horizontal-stretching outside runs, but Sheridan dialed those back a bit from DeBoer’s level.2.

To no one’s surprise, Sheridan changed his offense when Penix went down in 2020: 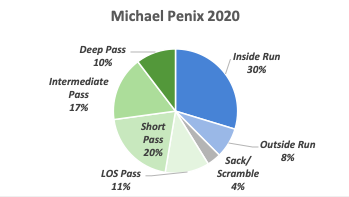 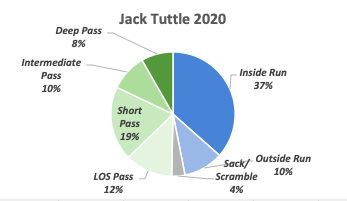 Inside runs increased to almost 40% of all plays, while passes of all types decreased, except for LOS throws. Intermediate passes were the biggest reduction, from 17% to 10%.

The similarities continue in personnel groups. Sheridan’s offense primarily remained in 11 personnel (one RB, one TE, three WR), the preferred group of DeBord and DeBoer. Occasionally, Nick would throw another TE out there. I think it’s at least plausible that Sheridan could flash some 10 personnel this season, given the talent and depth at receiver.

Schematically, the run game is not complicated. It’s different variations of inside zone, occasionally with a QB read, either on a keep or an RPO (generally a backside bubble or slant). DeBord would use gap blocking schemes at times, (albeit much less than K-Dub offenses) but that’s pretty much disappeared with DeBoer and Sheridan.

Through the air, in addition to the bubble screens mentioned earlier, the Hoosiers used a heavy dose of shallow and intermediate crossing/mesh concepts. There was also a somewhat concerning DeBordian reliance on fades and back-shoulder fades, particularly when Tuttle was in. This is somewhat anecdotal, but it seemed like DeBoer’s offense featured more creative downfield passing and less reliance on low-percentage, hope-for-PI fades. Finally, DeBoer made getting the tight end involved a priority. While Hendershot didn’t help himself with drops, Sheridan didn’t exactly force-feed him the ball in 2020.

All of that to say, we’re still learning what we have with Nick Sheridan as OC. Is he DeBord 2.0, a young innovator who wants to take shots down the field, or somewhere in the middle? I suspect it’s the latter. We should be closer to an answer by the end of this season.

(2) What happens at QB is Penix suffers another injury?

I hate asking this question, but given Penix’s unfortunate history, we sort of have to talk about it. There are really two parts to this question. The first is how good was Jack Tuttle in limited duty in 2020 and is there room for him to improve? And second, just how ready is Donaven McCulley?

On Tuttle, the answer is…serviceable! He managed the Wisconsin game quite well, and his numbers would have looked better without a few drops (come on, MILES). He was asked to do almost nothing against Maryland, and he delivered! On the other hand, he was asked to carry a heavy load against Ole Miss, and he didn’t respond well.

But we have to look at how far those passes were thrown to get the whole story. 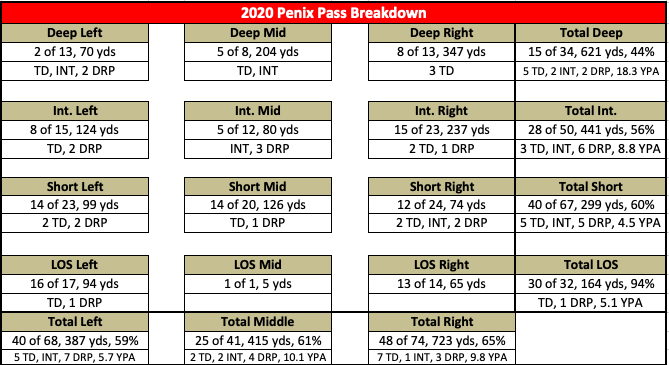 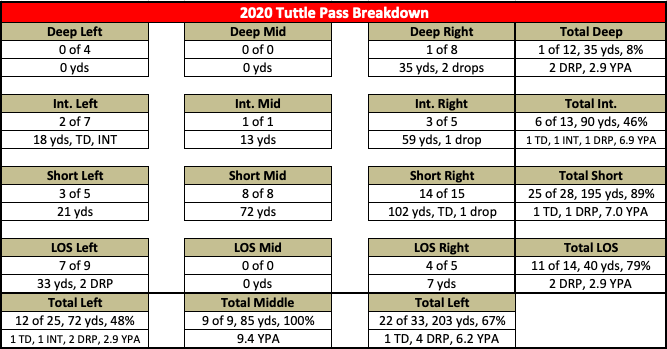 There’s an significant drop off on deep and intermediate passes from Penix to Tuttle. Tuttle’s accuracy numbers were built on nailing nearly all his short and LOS passes, which is valuable, but not as valuable as Penix’s downfield passing.

In a full season, I’m confident Tuttle’s deep and intermediate numbers would improve (1 out of 12 on deep passes has to include some bad luck), but it’s unlikely he would rise to Penix’s level. So a Tuttle-led offense is going to involve less of a downfield threat, with effective short passing, (mostly) good decision-making, and enough mobility to move the chains when needed. That’s not a bad place to be, and IU can win games with a QB like that. Even if Tuttle shows no downfield improvement, it’s the Peyton Ramsey offense with a stronger arm and somewhat less elusiveness/mobility at QB. It’s your quintessential high-floor, low ceiling situation.

On the other hand, by all accounts, Donaven McCulley was very impressive in Fall Camp, to the point where the coaching staff indicated that he might see the field this season even if Penix and Tuttle are healthy. Comments like that confirm that McCulley has something the other two lack – a true dual-threat skillset – and the coaches already trust him to flash that skillset in games.

So if something happens to Penix, I would be surprised if McCulley doesn’t get a possession or two per game. Then, depending on what he shows and how Tuttle performs (particularly on downfield passes), McCulley’s share of playing time could increase. Dynamic QBs don’t grow on trees, and they tend to find the field early. If McCulley is as talented as the coaching staff’s preseason comments indicate (and his high school film suggests he is), it’s in everyone’s interest to see what he can do, both to help the 2021 team and set the program up for success in 2022 and 2023. Of course, if Tuttle demonstrates significant improvement and/or McCulley shows his youth when given an opportunity, McCulley could remain limited to specific packages.

At the end of the day, if something happens to Penix, I think we’ll see both QBs play. Coach Allen has demonstrated a willingness to play the hot hand without regard to seniority (see Lagow/Ramsey in 2017, or Ramsey/Penix in 2018), and I expect he will do the same this time around.

Assuming Michael Penix stays healthy, what does his season look like? He’s flashed amazing potential while also struggling in other games.

Below we’ve lined out a chart representing his ceiling, his actual production in 3 seasons, and a floor.

Interestingly if you look at his career, Penix has thrown 414 career passes which, on a 12 game regular season, averages out to 34.5 per game. Indiana averaged 36.5 passes per game last year and 36.4 in 2019, so perhaps that 34.5 number is a little low. But there’s also the possibility that Indiana relies a little bit more on Stephen Carr and the running game. Either way, for this exercise, utilizing the same attempts in all 3 scenarios provides an easier comparison for stats such as yards, TDs, and interceptions. Also, it underscores the unfortunate nature of Penix’s career: in three seasons, he’s played essentially one full season’s worth of games.

The ceiling scenario represents a Michael Penix and Indiana offense that is firing on all cylinders. He’s approaching 4,000 yards which is 327 yards per game. That would be way above his career mark. It’s very unlikely to happen, but would come from a couple different factors.

If you want a comparison for a ceiling, look at the Ohio State’s passing game last season, with Justin Fields at the helm. The interception and sacks rates are a little higher for Ohio State than a ceiling for Michael Penix, but Michael Penix doesn’t have to face the Indiana defense!

Indiana almost certainly won’t reach the ceiling projections. They are incredibly lofty. However, if Penix is fully healthy and the pass catchers are both reliable and explosive, there’s no reason the Hoosiers come close to the level of Justin Fields and the 2020 Buckeyes.

But on the flip side, there’s also the possibility that things do not work out. There’s a scenario where Penix plays but his physical ability is reduced due to injury, the line is so poor that he has little time to produce in the pocket, and/or Nick Sheridan’s offense simply doesn’t click. Again, as unlikely as the ceiling scenario is, the chance of falling to the floor scenario is almost as remote.

Perhaps it ends up looking closer to the 2017 Indiana passing offense that was a split between Richard Lagow and Peyton Ramsey. There are a lot of similarities when looking at the completion rates, YPA, and YPC.

On a positive, that 2017 Indiana team struggled. And we are comparing that season to the absolute floor of a full season of Michael Penix under center. That’s the worst case scenario and one Indiana will almost certainly clear.

The most likely projections obviously fall somewhere between the ceiling and floor. If I had to wager, it would be slightly above his actual performance thus far. For one final reference point, a Penix season that just barely improves on his actual performance to date will be almost identical to Nate Sudfeld’s best season, his senior campaign in 2015. That season was the best passing season by an IU QB ever, so we shouldn’t be at all disappointed if Penix equals that! Paired with Indiana’s defense, that should be enough for Indiana to have a season most fans are satisfied with.

(4) Does experience equal improvement for the O-line?

Indiana’s offensive line play last year was not great. While Indiana’s overall sacks allowed was very low at just 1.25 per game, 17th nationally, that low sack number is partially indicative of the quarterback’s impact (Mikey P has a quick release). 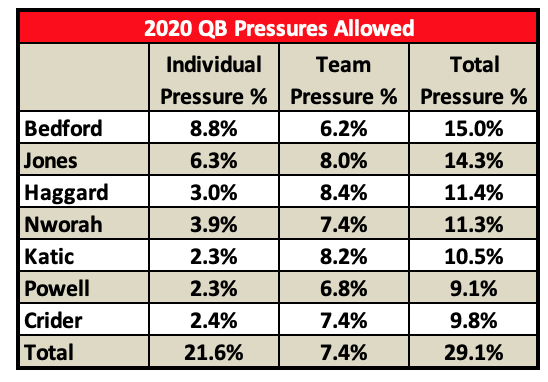 As you would expect, most of the pass rush occurred on the outside. Luke Haggard performed the best allowing 4 individual pressures against Ohio State, 1 against Wisconsin, and 0 in the other 3 games in which he was given decent playing time. Matthew Bedford and Caleb Jones struggled against the pass rush. They both allowed 5 individual pressures against Penn State. Bedford allowed 4 to Michigan and a whopping 7 to Ohio State. Jones allowed 5 to Michigan and missed the Ohio State game (Haggard filled in).

Inside, Mike Katic and Dylan Powell return. They both performed adequately last season. Michigan transfer Zach Carpenter appears to have the inside track to replace the reliable Harry Crider at center.

In total, Indiana allowed a pressure on 29% on non-garbage drop backs, up significantly from the 24% in 2019 against Power 5 competition (22% overall). Losing Simon Stepaniak was a part of that, but Jones and Bedford regressed in terms of pressures allowed. Bedford allowed 15 pressures in 9 games in 2019 compared to 24 in 7 games last year.

As a whole, Indiana has a lot of depth back from a position group that struggled last year at times both in pass and run blocking. Will it get better? The hope would be that the two tackles return to 2019 form. If they can, then Indiana’s line should be improved. If they can’t then perhaps it’s time to give Haggard more possessions at tackle and look at moving Bedford inside.