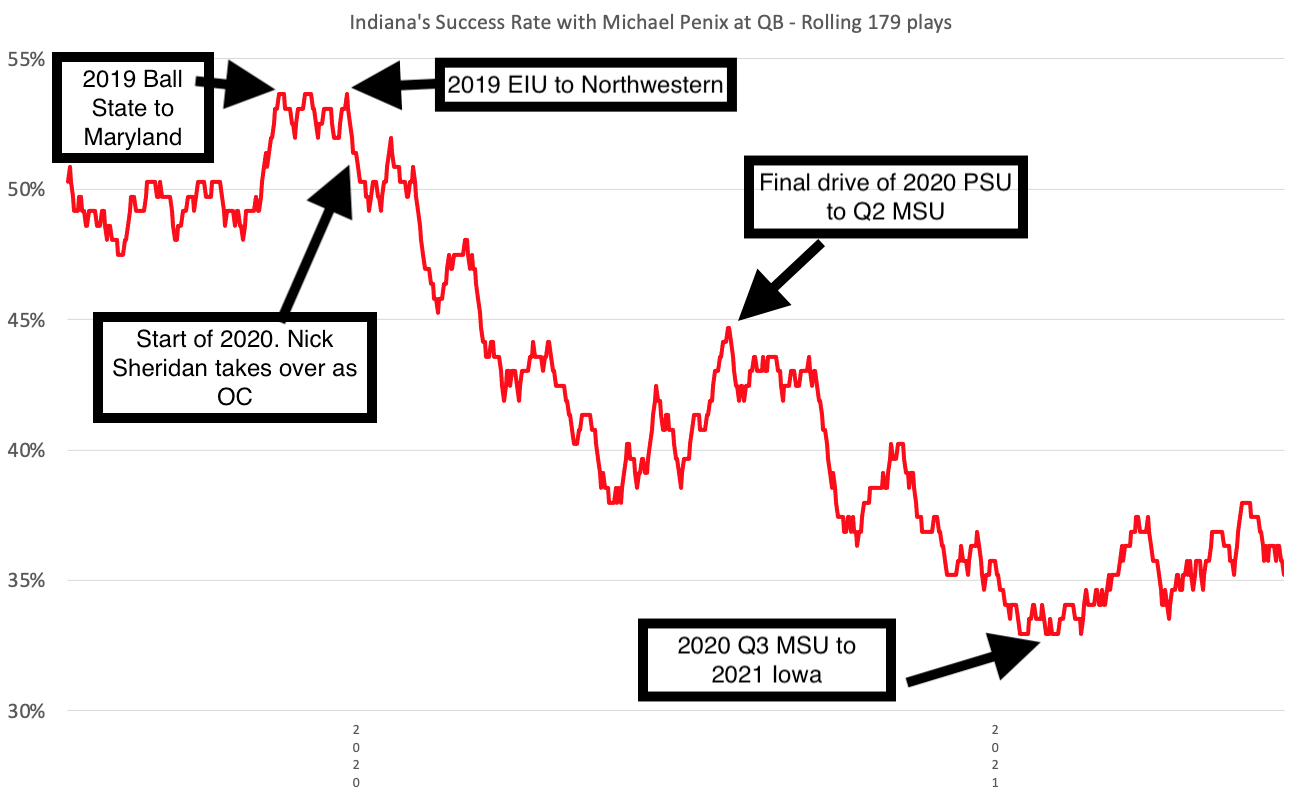 Indiana has fallen to 1-2 on the season with much of the blame resting on the offensive side of the ball. Even ignoring the turnovers and inability to finish drives, the Indiana offense has not functioned reliably this season. It hasn’t done so in a while.

This season, Michael Penix has taken 179 snaps excluding kneels. This does include garbage time just so we have enough of a sample size. Indiana’s success rate on those 179 plays is just 32%. We can use that 179 play number to create a rolling 179-play success rate chart of Indiana’s offense under Michael Penix.

The highest point, in terms of offensive success rate, under Michael Penix occurred at the beginning of the 2019 season. Indiana opened against Ball State then dominated Eastern Illinois, a game that Penix was injured in. He sat out against Ohio State and Connecticut before returning against Michigan State, Rutgers, and Maryland before getting injured again. That stretch of 5 games with an injury in the middle represents the peak efficiency mark of the Indiana offense under Penix. He would come back against Northwestern before suffering a season-ending injury. At that time, his 179-play success rate was 51%, the same as Indiana’s 2019 success rate with Penix at quarterback. That mark, hovering around 50%, represented an efficient and effective offense under Kalen DeBoer.

Coming off two consecutive season-ending injuries along with a new offensive coordinator in Nick Sheridan, the Michael Penix offense looked bad for most of the 2020 opener against Penn State. Indiana rebounded some against Rutgers, Michigan, and the start of the Michigan State game. The stretch from the final drive against Penn State in regulation to the 2nd quarter against Michigan State represents the best success rate that Indiana has had over a 179-play stretch since Sheridan took over. Since then, the bottom has fallen out. The lowest stretch with Penix at QB came from the 3rd quarter against Michigan State in 2020 to the 2021 Iowa game.

Before we go on, I know what you’re thinking. But Punt, Indiana played Ohio State during that stretch. Don’t you remember how awesome Penix was? And the answer is yes, I do! But Indiana’s offense was awesome in that game almost entirely due to big plays. They had gains of 68, 51, 63, 33, 25 and 56 yards. If Indiana could have that sort of explosiveness every game they’d be a great offense. The problem is, as Bill Connelly once wrote, “The key to explosiveness is efficiency. The key to making big plays is being able to stay on the field long enough to make one.” For Indiana since the start of 2019, often that has been a problem. Their efficiency has fallen from around 50% to around just 35%. They can’t stay on schedule enough to keep picking up first downs and give themselves more opportunities to create big plays.

The next question is who is to blame? That’s a good question that isn’t simple to answer.

The obvious answer is offensive coordinator Nick Sheridan who took over at the start of 2020. Indiana’s success rate really started to fall at that point. It’s also worth noting that in addition to Sheridan’s OC duties, he’s also the QB coach, so to the extent IU’s QB’s aren’t developing, Sheridan is at least partially to blame on that front as well.

But injuries are also to blame. Michael Penix was coming off his second season-ending injury and would later suffer a third. As Sheridan noted this week, Penix hasn’t really had a normal offseason since 2018. Because of that, it’s not surprising that he hasn’t developed like we might expect. While many fans and members of the media point to his 2020 high points – most notably the end of the Penn State game and the Ohio State game – he also struggled badly at times in 2020. The vast majority of the Penn State game and the Maryland game prior to his injury were pretty rough. Of the 3 games that Indiana topped a 40% success rate in 2020, Jack Tuttle started two of them (Wisconsin and Ole Miss).

The running game has been a contributor to the success rate decline. Indiana’s rushing success rate is 38% over the last 2 seasons compared to 45% between the preceding two years and 42% from 2013-2019.

The Hoosiers have been abysmal in passing down situations this year averaging just a 19% success rate which is barely better than the 18% Indiana averaged in 6 games with freshman Zander Diamont at quarterback in 2014.

In the end, it doesn’t really matter who is to blame. There’s probably fault to spread around. The important thing is if the offense cannot get quickly get righted, this team will have a lot of time in December to reflect upon a disappointing 2021 season.