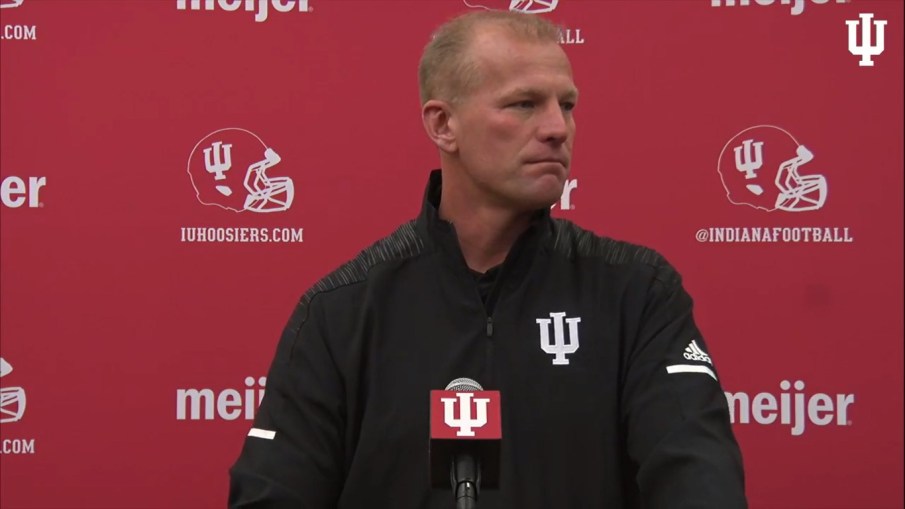 In late September 2019, just four games into his first season as IU’s offensive coordinator, Kalen DeBoer faced a challenge: he needed a way to move the ball against a tough Michigan State defense. He had a young, injury-prone QB with a strong arm and a quick release. His offensive line was a little leaky, and the running game wasn’t particularly strong. He had talented wideouts and a good tight end. Taking all of those inputs, DeBoer’s answer to the challenge, at least in part, was simple: bubble screens. His offense ran a whopping 15 of them against Sparty. That was good for 21% of IU’s 70 offensive plays. These were quick horizontal passes, generally caught behind the line of scrimmage, with wide receivers or tight ends serving as blockers. Most of the bubbles were to slot wideout Whop Philyor. Some were “swing screens” where a running back caught a pass after going in motion before the snap. A few were to tight end Peyton Hendershot. The principle and purpose was the same – stretch the defense horizontally. Whether all 15 of these were “called” as opposed to RPOs where Penix opted to throw the bubble rather than hand it off is hard to say. There was probably a little of both. Some of those bubble screens contributed to Michael Penix’s school record 20 straight completions, as the Hoosiers put up 356 yards and 31 points against a tough MSU defense.

The bubble screen was obviously a major component of DeBoer’s gameplan that day and throughout his one season at IU. He could pair them in RPOs with inside zone runs, such that if a 2nd level defender (generally an OLB) cheated out to defend the bubble, the offense had a numbers advantage on inside zone (and vice versa). The offensive line doesn’t really have to do anything for a bubble screen to succeed because the ball is out of the QB’s hand so fast. The receivers and/or tight ends have to hold their blocks, but if the QB has a good arm and quick release (like Penix), the blocks don’t have to be held for long for the runner to pick up at least a few yards after making the catch. If the QB, blockers, and receiver all do their jobs reasonably well, the play should pick up 3-7 yards each time. If there’s a defensive bust or someone misses a tackle, 10-20 yard gains (or more) aren’t out of the question. It’s also a nice way to get a QB in rhythm because it’s a quick, uncontested, pressure-free throw, that, while maybe not as easy as it looks, is nowhere near the hardest throw a QB will face.

Of course, there are instances when an aggressive defender blows up a bubble for a loss, but when that happens, it generally means the defense is vulnerable to any number of bubble action schemes. The most common of these is simply having one of the “blockers” fake the block and then break downfield in a wheel or post route, along with a QB pump-faking the bubble pass. Kevin Wilson loved this play. Ted Bolser caught a wide open TD on a fake-bubble wheel against Sparty back in 2012. In 2019, Ty Fryfogle was similarly wide open on a fake-bubble post vs. Penn State. On top of that, an offense can run tunnel screens away from a fake bubble. And there’s almost certainly more you can build off of this simple play. The point is that the bubble itself doesn’t have to pick up chunks every time – part of the purpose is to set up the defense for bigger plays, or to keep the defense from cheating to stop the offense’s base runs.

Admittedly, bubble screens work better against some defensive schemes than others (MSU’s 4-3 scheme at the time was particularly vulnerable), which is probably why DeBoer didn’t run it 15 times every game. Switching out the weaker-armed Ramsey for Penix also likely caused DeBoer to dial it back some. But even with Ramsey, DeBoer generally ran the bubble at least 5-6 times a game in 2019.

Fast forward to 2021. Kalen DeBoer is still running a dynamic offense, but now he’s the head coach at Fresno State. When DeBoer left after the 2019 season, he reportedly endorsed then-TE coach (and former QB coach under Mike DeBord) Nick Sheridan as his replacement. Tom Allen followed that endorsement and hired Sheridan as his new OC, with the stated intention that the offense remain as close to DeBoer’s as possible. The bubble screen didn’t immediately disappear from the offense. It showed up a handful of times per game (again, whether called or as part of an RPO) in the COVID-shortened 2020 campaign, although it was more focused on Whop, rather than Stevie Scott on swing screen’s or Hendershot on TE bubbles. But so far in 2021, I’ve only seen one bubble screen in five games – to DJ Matthews vs. Idaho.

Why has Sheridan quite clearly deemphasized the bubble screen? The conditions that made it perfect for DeBoer’s offense are mostly still present. Most significantly, Penix is still the QB, and the O-line and rushing attack still aren’t great. Whop is gone, but DJ Matthews seemed like an obvious bubble target, and even now that he’s injured, David Ellis (again, if healthy), Jacolby Hewitt and others could do it. While the outside receivers probably aren’t quite equal to Donovan Hale and Nick Westbrook as blockers, Frygole, Miles Marshall and others aren’t exactly small guys, and they were involved in DeBoer’s bubble-heavy offense in 2019, so presumably they know what’s required. If they aren’t good or willing blockers, that seems like a coaching problem (and I don’t think that’s the case). On the RB and TE front, Hendershot is still around, and, if anything, Stephen Carr should be better than Stevie Scott on swing screens.

Whatever the reason, Sheridan appears to be done with bubble screens. In its place, in terms of horizontal stretching, he appears to favor jet sweeps, reverses, QB rollouts, and the occasional outside zone. There’s at least two problems with this: (1) all of those (with the exception of rollouts) require the offensive line to move horizontally and block, which is not their strong suit, and (2) with limited exceptions, none of the plays mentioned above build off each other or meaningfully help any other part of the offense function better. Moreover, he’s generally not running these horizontal-stretching plays enough to really threaten the defense (much less than 20% of IU’s plays so far).

As we’ve said many times on this site, one key difference between Kalen DeBoer and Mike DeBord is that DeBoer had an actual offensive system, where plays built off and assisted each other, while DeBord simply had a collection of plays. Bubble screens were a part of DeBoer’s system, a system that Coach Allen seemed to want to keep around. Now at least one major part of DeBoer’s system appears to have been almost entirely eliminated from the offense.

Don’t get me wrong, reintroducing bubble screens is not going to turn a bad IU offense into a good one. Far from it. The problems run deeper than that. The point it that by removing the bubble screen and the various countermoves built onto it, Sheridan is moving out of the DeBoer realm. Again, as we’ve said before, this season is about finding out who Nick Sheridan is as an offensive coordinator. The disappearance of the bubble screen is one piece of evidence showing that we just might have DeBord 2.0 on our hands.