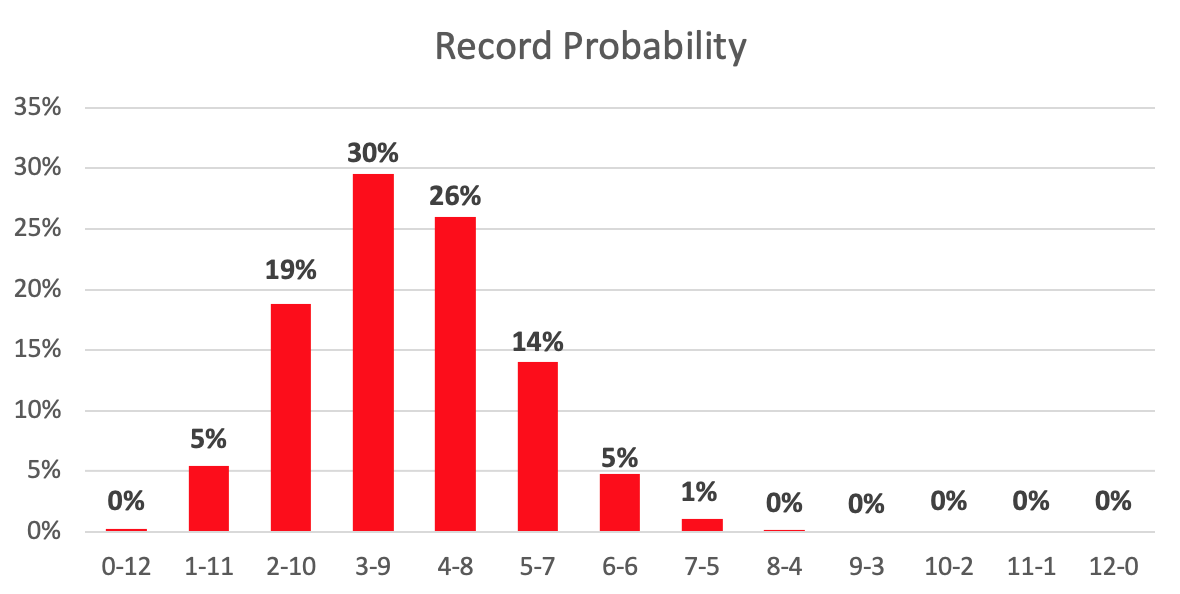 In terms of offensive returning production, Indiana is 110th nationally. This does account for transfers coming in, which means the addition of Connor Bazelak is included. It appears the biggest area lowering the Hoosiers in this metric is the departure of Peyton Hendershot, Ty Fryfogle, and Miles Marshall. Indiana’s top 3 pass catchers are gone, accounting for 65% of Indiana’s total receiving yards last year. Because D.J. Matthews was injured so early in the season, his value to this returning production metric is limited. Same for Emery Simmons (just 243 receiving yards in 2021 at UNC) and Cam Camper, a JUCO transfer. Certainly Indiana’s pass catchers have potential, but they are lacking when simply looking at returning production.

Defensively, IU is 88th in returning production having lost Micah McFadden and Ryder Anderson. While the Hoosiers brought in several new faces, their 2021 production falls short of they player they are replacing.

In terms of recent recruiting, Indiana had a 25th ranked class using the 247 composite ranks in 2022. The year before was 54th. The year before that was 57th. The Hoosiers will get some bump for the strong 2022 class, but in general, few of those recruits will be impact players in year 1.

Finally, recent history. Generally in college football, great programs stay great and bad programs stay bad. There are prime examples of outliers on both extremes, but college football is not built on an even playing field. The final AP poll from 50 years ago reads as such: USC, Oklahoma, Texas, Nebraska, Auburn, Michigan, Alabama, Tennessee, Ohio State, and Penn State. Four of those programs are in the 2022 top 10, a few have fallen on hard times, and a few others are in the receiving votes section.

Having said all that, Indiana’s 2021 season was miserable. It has to factor into how the 2022 team is projected. Now there is a lot that could go right for Indiana especially given all the turnover in both coaches and players. It would not be shocking to see Indiana battling Purdue for the chance to go to a bowl game. Tom Allen was able to get IU to that point in both 2017 and 2018. It also wouldn’t be shocking to see Indiana’s offense struggle under a new coordinator with unproven QBs, especially if injuries crop up. If things snowball again, you can see the Hoosiers having back-to-back dreadful seasons.

Along with Indiana’s poor projection, they face a tough schedule. According to SP+, Indiana is projected just 0.8 total win against Cincinnati, Nebraska, Michigan, Penn State, Ohio State, Michigan State, and Purdue. Yes, against 7 opponents Indiana is projected less than one full win. The Hoosiers are underdogs at home to Western Kentucky. Illinois is a complete tossup in week 1.

If Indiana can pull off a 3-0 start, 4-8 is still the most likely record, but 5-7 is not far behind. The chance at 6+ wins rises from 6% to nearly 19% without even factoring in any positive adjustment to Indiana’s current below-average rating.

If I had to guess, Indiana is ranked too low in SP+. They are projected just slightly better than the dumpster fire 2021 team. Even if you project Indiana at a completely average team, that only moves projections to 4.3 wins and a 20% chance at a bowl game. For Indiana to gain back the lost positive momentum, they need to significantly outperform expectations, have favorable bounces and luck, and have their opponents take a step down from their own expectations. Even if Indiana improves, the final result won’t look as good if the Big Ten (plus Cincinnati) remains as strong as projected.

It would be great for Indiana’s 2021 season to be a blip on the radar and for the Hoosiers to return to the success of the 2019 and 2020 seasons. However, based on both Bill Connelly and the Vegas consensus, a rough season is ahead.