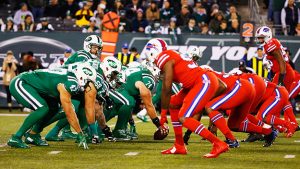 We’re back after a one-week hiatus. The chart against Ohio State looked like that Color Rush game between the Bills and Jets that wreaked havoc on colorblind people. Which is more havoc than Indiana wreaked in that game so I figured it was probably just best to move on. END_OF_DOCUMENT_TOKEN_TO_BE_REPLACED

There’s a reason why Bill Connelly had Indiana with a postgame win expectancy of 61%. The Hoosiers did a lot of things well. Or rather, kept Michigan State from doing things well. Anyway, let’s dive in.

END_OF_DOCUMENT_TOKEN_TO_BE_REPLACED 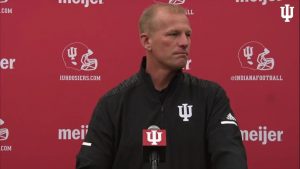 In late September 2019, just four games into his first season as IU’s offensive coordinator, Kalen DeBoer faced a challenge: he needed a way to move the ball against a tough Michigan State defense. He had a young, injury-prone QB with a strong arm and a quick release. His offensive line was a little leaky, and the running game wasn’t particularly strong. He had talented wideouts and a good tight end. Taking all of those inputs, DeBoer’s answer to the challenge, at least in part, was simple: bubble screens. His offense ran a whopping 15 of them against Sparty. That was good for 21% of IU’s 70 offensive plays. These were quick horizontal passes, generally caught behind the line of scrimmage, with wide receivers or tight ends serving as blockers. Most of the bubbles were to slot wideout Whop Philyor. Some were “swing screens” where a running back caught a pass after going in motion before the snap. A few were to tight end Peyton Hendershot. The principle and purpose was the same – stretch the defense horizontally. Whether all 15 of these were “called” as opposed to RPOs where Penix opted to throw the bubble rather than hand it off is hard to say. There was probably a little of both. Some of those bubble screens contributed to Michael Penix’s school record 20 straight completions, as the Hoosiers put up 356 yards and 31 points against a tough MSU defense. END_OF_DOCUMENT_TOKEN_TO_BE_REPLACED

We’re going to try something new this week in reviewing an advanced box score for the previous game. What better game to start out with than the one everyone wants to, if they haven’t already, forget.

END_OF_DOCUMENT_TOKEN_TO_BE_REPLACED

At the start of the season, Vegas had the Hoosiers’ line at 7.5 wins. Bill Connelly had Indiana about 6.8 wins. Most Indiana fans had the Hoosiers at 8 wins with some thinking 9 or even 10 as a possibility. Seven wins was considered a worst-case scenario.

Five games into the season, everyone is disappointed. Many have already moved on to basketball. And if basketball is your thing, you’re in luck! The odds that your favorite beat writer will be talking about Indiana’s chance of winning a bowl game instead of writing about TJD’s early-season dominance is slim.